At the beginning of January, just a few weeks after the 2020-21 NBA season started, the Utah Jazz were sitting at the bottom of the Western Conference with a record of 4-4.Their lackluster efforts in those games had many believing that the Jazz needed to make some serious changes to their team. They did not look like a playoff team at all. However, after a devastating loss to the New York Knicks on the road, in which they blew a 13 point lead, a switch was flipped and the Jazz looked like a completely revitalized squad. Following that loss, they went on an 11-game winning streak and are currently sitting as the first seed in a jam-packed Western Conference with a league best 27-8 record. So, now that Utah seems to have gotten their act together, are they the real deal? I believe they are and I’ll tell you why.

What the Utah Jazz had been lacking was a unified drive to win, but they’ve seemed to have found that during their incredible run thus far. “The team chemistry has never been at a higher level than this,” said Jazz star Donovan Mitchell following a win in February. The fact that this squad has been able to rally around one another and push each other to their limits has to be the biggest reason why they’ve been such a lethal team. Not to mention head coach Quin Snyder is one of the best in the business, and his principles and coaching style fit the Jazz’s personnel. Snyder has set a culture within this organization that no one will have it easy going up against a team that’s unified as one; and we’ve seen just that with their recent success. With the team playing together, they’ve seen major progress in their defense, which had been inconsistent in previous years. The Jazz currently have the third best defensive efficiency rating, are second in defensive rebounding, and eighth in blocks per game. 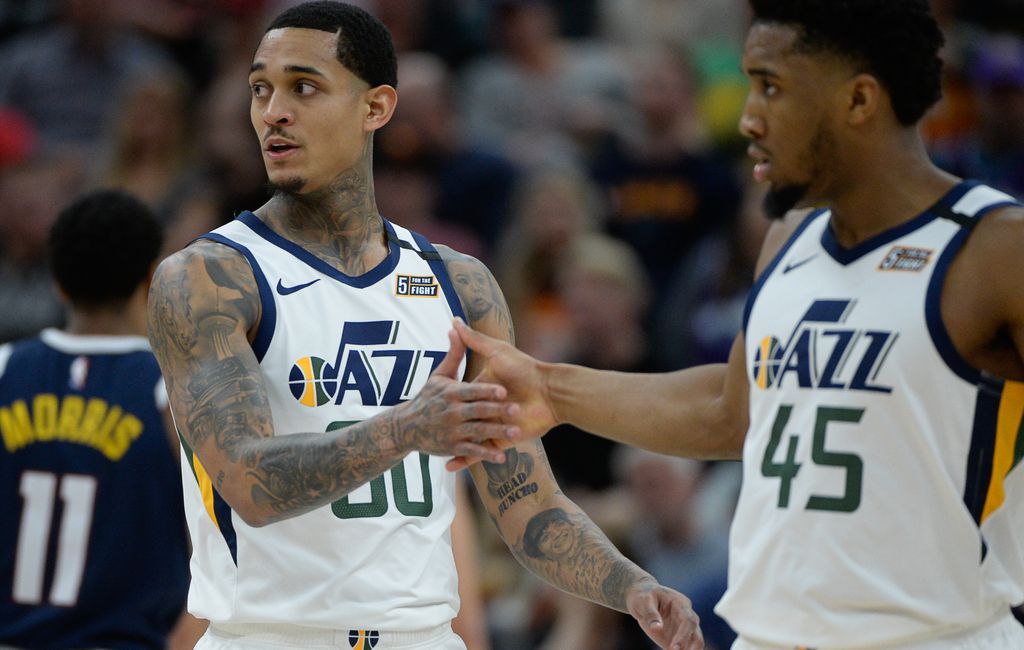 The fact that Utah’s role players stepping up big time has been an extremely important part of Utah’s success as well. Guys like Bojan Bogdanović, Joe Ingles, Royce O’Neale, Mike Conley, and Jordan Clarkson are having amazing seasons for this squad. That’s aside from their two stars of course. All-Star Donovan Mitchell has averaged 24.5 points and Defensive Player of the Year candidate Rudy Gobert has averaged 14 points, 13 rebounds, and three blocks per game this year. But, with contributions from the aforementioned players, the Jazz seem unstoppable. Everyone’s confidence seems to be extremely high right now and that mentality is a great one to have especially come playoff time when the stakes are at the highest. And by the way, Jordan Clarkson needs to win Sixth Man of the Year this season, no ifs, ands, or buts! There has literally been no one more impactful for their team off the bench this year than Clarkson. Clarkson’s play this year reminds me of what J.R. Smith was doing for the New York Knicks in that fantastic 2012-13 season the team had. Smith won the Sixth Man of the Year averaging 18.1 points per game, the exact same per game number as Clarkson is averaging right now, though Clarkson has the better shooting splits with 45/37/97. Smith’s play was a huge energy booster for that Knicks team that not only made them scary offensively, but made them very fun and exciting to watch every night. Clarkson gives that same energy boost for this Jazz team.

The Utah Jazz are clearly no joke. They’ve been on an insane tear, so hopefully they can keep this incredible play up following the All-Star break. How great would it be to see the Utah Jazz back atop the Western Conference heading into the playoffs for the first time since Karl Malone and John Stockton ran the show? This Jazz team has what it takes to take that next step and be a championship team. Now we’ll have to see what happens with the Los Angeles Lakers, Los Angeles Clippers, and Denver Nuggets, but does this Jazz team have a legitimate chance to knock them out of the playoffs if they match up? Hell yeah they do! Especially after last year’s playoff disappointment, they are as motivated and hungry as ever, so it’s a mistake to count them out. Watch out folks, the Jazz are coming for people’s necks this year.