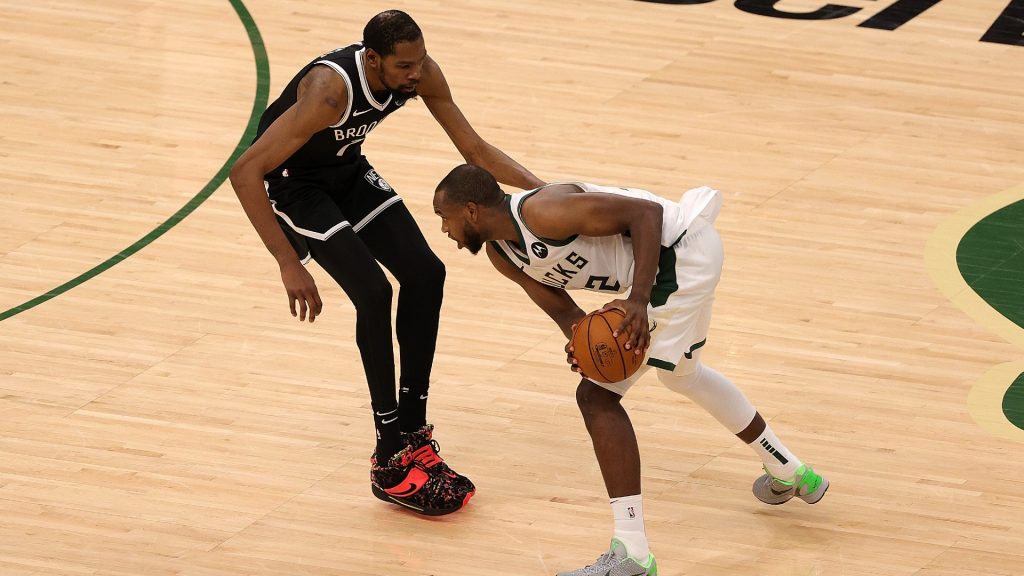 In a crucial Game 6 of the Eastern Conference semi-finals between the Milwaukee Bucks and Brooklyn Nets it was Khris Middleton, and not Giannis Antetokounmpo, that willed the Bucks to a 104-99 victory, ensuring a Game 7 on Brooklyn’s home floor.

The Bucks remained undefeated at home in these playoffs (5-0, 3-0 vs. Nets) with a relatively easy win over the short-handed Nets on Thursday night as Khris Middleton led the way with a playoff career-high 38 points, 10 rebounds, five assists, five steals and five 3-pointers on 11-of-16 shooting. Giannis Antetokounmpo hit 12-of-20 shots and scored 22 of his 30 points in the paint along with 17 rebounds and three assists, and Jrue Holiday chipped in with 21 points, eight boards, five assists and four steals, despite hitting just 8-of-21 shots and 1-of-10 3-pointers on the night.

The Nets started their 41st different starting lineup of the season and their fourth different one in these playoffs, starting Durant, Harden, Joe Harris, Blake Griffin and Game 5 hero Jeff Green, who started over Bruce Brown last night. Durant led the way with 32 points, 11 rebounds, three dimes and two 3-pointers on 15-of-30 shooting, Harden added 16 points, five boards, seven assists, four steals and three 3-pointers on 5-of-9 shooting, and Griffin came through with 12 points, six boards, two steals, a block and a 3-pointer, resulting in the only double-digit scoring performances for the Nets. Durant played all 48 minutes of Game 5 and saw 40 more minutes in this one, so you have to think he’s borderline exhausted. – NBC SportsEdge