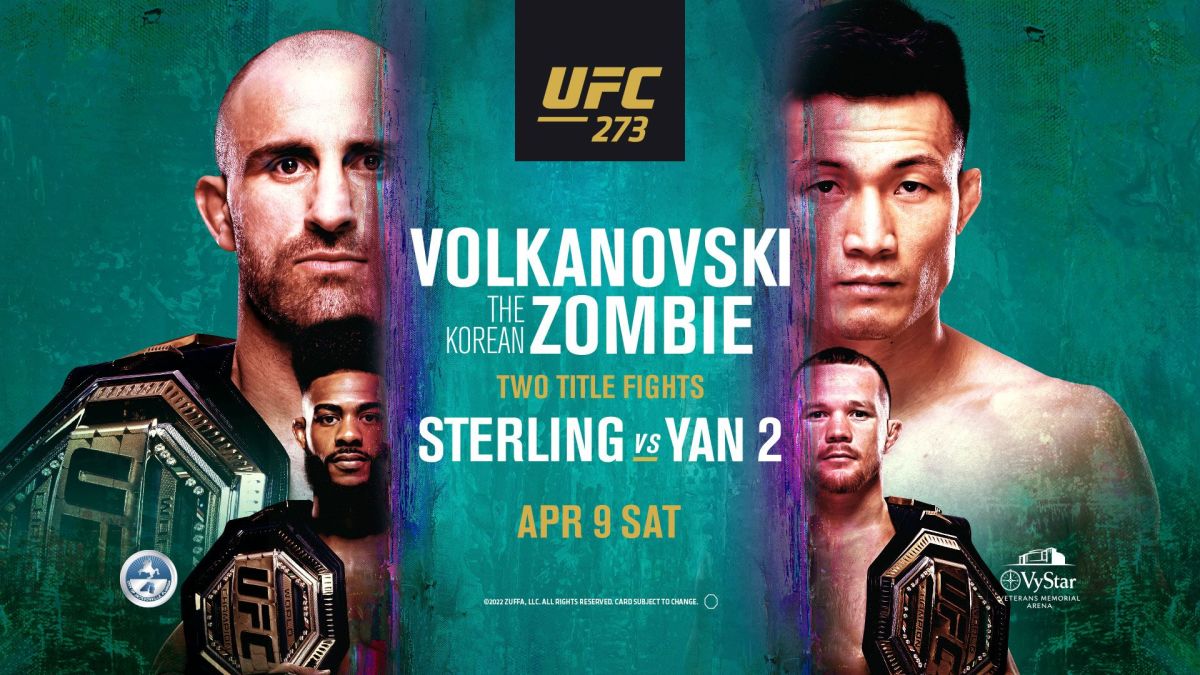 The UFC returns with another stacked pay-per-view card down in Jacksonville, Florida at the VyStar Veterans Memorial Stadium, the same stadium where nearly a year ago the promotion held its first event with fans since the start of the pandemic. The card for UFC 273 is headlined by two exciting title fights and an additional bout including one of the most exciting prospects in the entire promotion against a former title challenger coming off of a dominant win. As always, the undercard is filled with talented prospects looking to raise their rankings in hopes of cracking the top 15 in their respective divisions. The prelims kick off with a stellar welterweight bout between Mickey Gall and Mike Malott. Jairzinho Rozenstruik and Marcin Tybura should bring the heat in their heavyweight bout that should produce another top contender. Ian Garry, deemed the next Conor McGregor, gets his second UFC bout against Darian Weeks. As always, let’s break down the main card predictions.

Mark O. Madsen has used his decorated wrestling credentials to pound through his first three fights in the UFC. The Olympic silver medalist came off a close split decision win against the legendary Clay Guida in August. Guida was able to eliminate Madsen’s wrestling threat but was unable to control the lethal body strikes that carried Madsen’s to victory. Vinc Pichel on the other hand, is a much more decorated striker than Madsen. Pichel is looking to be more active after winning three straight fights in the last three years. He’s handled wrestlers like Austin Hubbard with ease and even has a decent offensive wrestling game himself. If Pichel is able to keep Madsen at distance and use his length to his advantage, I would imagine a tough evening for Madsen as he fights to keep his undefeated streak alive.

Mackenzie Dern was on a ridiculous tear through the strawweight division before meeting Maria Rodriguez and was unable to implement her own game plan. Despite that, Dern’s run says a lot about what she can do to the rest of the women in her division when on point. She finished three of her four last wins with first-round submissions. Her striking lacks greatly but her jujitsu has made up for it. She’s matched up with another striker in Tecia Torres. However, the big difference between her former opponent, Maria Rodriguez, and Tecia Torres is power, by a significant margin. Torres only has only TKO to her name compared to Rodriguez’s six. Torres does have some solid volume numbers to her name but I can’t imagine this would be much of a concern for Dern once she’s able to get the fight to the ground where she’ll likely dominate.

Khamzat Chimaev has been one of the UFC’s most exciting prospects since McGregor was on his rise. Even after dealing with what was described as a nasty battle with COVID-19, Chimaev still looked perfect in his last fight against Li Jingliang, which ended in a first-round submission. In fact, Chimaev has been almost perfect in all of his bouts in the UFC. He’s had more UFC fights than significant strikes taken, which is absolutely wild to wrap your head around. All of his fights have ended with finishes in the first two rounds, including a 17 second knockout of Gerald Meerschaert. While Gilbert Burns still looks to be in his prime as a fighter, I think Chimaev is too much of an all-around combatant for Burns to manage. Even though I do believe that the odds for this fight are disrespectful towards Burns. He’ll have to improvise outside of his standard gameplay to pull off a sneaky submission if he stands a chance to win. However, Chimaev’s style of offensive wrestling may simply be too much for Burns to have opportunities. Chimaev will likely be fighting for the belt after this expected win.

It took thirteen months for the highly anticipated rematch between Aljamain Sterling and Petr Yan has come to fruition. While Sterling was recovering from neck surgery, Yan claimed the interim belt against Cory Sandhagen in an all-out brawl that showed Yan has a massive chip on his shoulder to earn back what’s his. Especially considering that Yan was winning the first fight and had all the momentum, all the pressure is on him to perform on Saturday’s UFC 273. Even when Sterling was throwing awkward kicks and hooks, Yan barely bit and technically picked Sterling apart once his tank ran out. I can’t expect much to change unless Sterling can pull something out of his back pocket and pull off a quick submission. Sterling stands little chance to be able to outpace Yan so he’ll have to find a finish if he wants any chance to pull the upset. It’s hard to see Sterling winning this fight and a potential finish would only be the cherry on top for Yan’s continued dominant run in the UFC.

Aspiring to become more of a consistent fighter, Alexander Volkanovski, looks to defend his title for the second time within a year. While Max Holloway was originally scheduled to earn his belt back, the popular Chan Sung Jung, AKA “Korean Zombie”, stepped in for one last title shot. Coming off a dominant victory against Dan Ige, Korean Zombie has a high mountain to climb after Volkanovski’s last title defense. Volkanovski was forced to the trenches against Brian Ortega, even describing how he saw the lights dim in a nasty choke. But his resilience carried his way to another victory. I don’t see him facing any problems against KZ with his elite-level striking and phenomenal wrestling skills. KZ’s best chance is to pull a historic upset is to bring some surprise submissions that may catch Volkanovski by surprise. But even in Ortega’s best efforts to do the same, “The Great” still prevailed. I expect the trilogy between Max Holloway and Alexander Volkanovski to be booked for early fall when they can finally settle the controversy from the second fight.