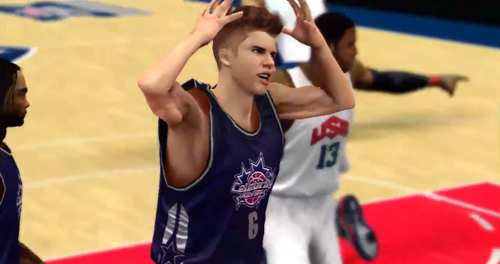 Last week Baller Mind Frame told you that Justin Bieber would be a part of the Celebrity Team in NBA 2K13, which came out today. Well, further proof that the Biebs is getting all nasty with it, a video has been released of the diminutive Canadian getting down, in a number of ways here, on the court. Only, Bieber isn’t so small considering the folks at 2K Sports decided to make him 6’4″ tall. Either way, all lies and exaggerations aside, below is a video that is both realistic and true fantasy. Watch and you’ll see what I mean:

So, as one of Justin Bieber’s songs goes, “Never say never.” Yes, you can get totally get jacked up when playing against the absolute best basketball players in the world, but if you sit down and think about it, you’ll come back out on the floor like gangbusters and school some mofos! It’s a great message to Bieber’s fans that you should never give up no matter what!

However, to non-fans of the Biebs, it’s all a bunch of bull caca and a great reason to skip the Celebrity Team part of the game. Swaggy.

(H/T to The Basketball Jones)