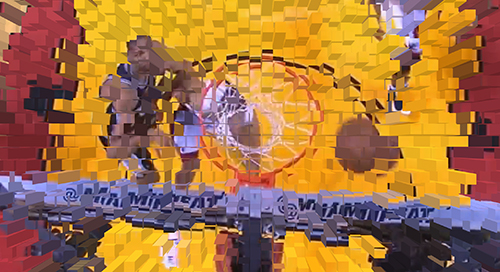 Tim Duncan’s missed hook shot may not have exactly been a brick, but it may as well have been.

When I was 13 years old, my dad signed me up at the local JCC (Jewish Community Center) in Brooklyn to play organized basketball for the first time in my life. And it was during the first season’s playoff semifinals that I formed the one tormenting basketball memory that has stuck with me ever since my early teens.

I was a half-decent player (I like to think so, anyway) and I was on the floor as the semifinal game was drawing to a close with my team down by one point. The best player on the team had the ball and was dribbling down the short side three-point line on the right side of the hoop and I was two feet away from the basketball on the weak side. With seconds ticking away, he airballed the shot that went over the rim and right into my hands. Scrambling to put it back up before the final buzzer I threw it up … and the ball rolled on the mount that attaches the rim to the backboard and fell to the other side. I was that close to being a hero for even a moment.

Of course, playing at my local J is nothing when compared to playing in the NBA Finals, but I can certainly empathize with what Tim Duncan must have felt two days ago. So close to tying the game with 48 seconds left in the fourth quarter, the fundamentally-sound hook rattled off the rim with Shane Battier doing all he could to keep Duncan from backing him in closer to the hoop. That shot will be with Duncan for a while.

Regarding my undying distaste for LeBron James and the Miami Heat, I will say that I am upset, but LeBron was named the Finals MVP for a reason. It is the kind of “King” James that I might not like, but one I can live with.

I might dislike LeBron James for the brazen cockiness with which he departed from the Cleveland Cavaliers and the city itself, but I appreciate the talent that turned this into possibly the greatest NBA Finals series that I have had the pleasure of witnessing in my life so far. A big part of it is because there is no substitute for skill, even if personality is wanting.

I will give credit to the Heat for making an adjustment on the once hot-handed Danny Green. I will admit that Chris Bosh had been a defensive difference-maker that accounts for a large percentage of the reason Miami was able to come back from being down 2-3 in this series. I will even admit that the better team won Game 7 because sports are not subjective, with athletic competition being the great equalizer of competing skill sets.

But just like I can’t forget my missed shot fourteen long years ago, I won’t forget Duncan’s missed jump-hook and follow. And Timmy probably won’t either.