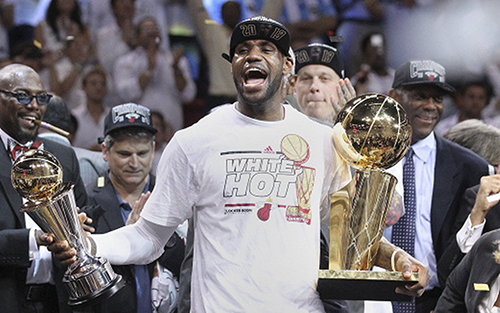 I was on a flight to San Francisco when Game 7 of the NBA Finals was scheduled to tip off.  There was DirecTV on the plane, but for some reason, there was every channel except ABC! However, I did get to watch “Gangster Squad” with my friend Anthony Mackie, though. Luckily, I didn’t miss any of the game thanks to a speedy flight and the NBA Gametime app on my smartphone.

We witnessed great basketball. We witnessed the excitement that makes this game so wonderful. We witnessed masterful coaching. Most of all, we witnessed Lebron James truly claim his place as the G.O.A.T. I’m not going to get into how many rings he has because he’ll never catch Bill Russell. He won’t catch Kareem Abdul-Jabbar’s scoring record. He’ll never score 100 points in one game like Wilt Chamberlain. Most importantly, LeBron James will never be Michael Jordan … and LeBron shouldn’t have to be.

He is Lebron James and the best basketball player we’ve ever seen.

Before I go further, let me say that I will always see Michael Jordan as the most dominant player. He owned everyone, mentally, and no one in life will ever be as competitive, which might be a good thing. That said, LeBron showed this season, and more specifically this NBA Finals, that he has made it to the mountain top and stands alone.

Basketball, broken down to its simplest form, is two things: offense and defense. What makes Lebron so special, and why he can be called the greatest, is due to the simple fact that no one can single-handedly guard him in the league now or before. On the other hand, he can guard any player on the floor at any given moment, and has done it.

Take it back to Game 6. The Miami Heat are down only two, 80-82, after LeBron led the charge back from being down big. Tim Duncan makes one of his twenty million moves to shake Chris Bosh and has a clear path right to the basket. The two points were all but on the scoreboard, but LBJ, giving up about 4-5 inches in height, goes straight up with Duncan and denies The Big Fundamental’s attempt, emphatically!

But it doesn’t stop there, he demands the ball and takes it the length of the court only to find Duncan waiting for him at the other end. One can tell Duncan wanted to return the defensive favor, but LBJ, with a power move and pump fake, scored over him and tied the game. To me, that play saved the series and won the championship. That play was LeBron’s message to everyone, “I can stop your best guy, no matter how big or small, and no one can stop me.”

Throughout this season, I’ve seen LeBron guard every position in the league, at some point, and not just stuck on a man after a defensive switch, or being out of position, but actually buckled down and played defense. From point guards and even some centers, LBJ can, and has effectively defended them all. He may not be able to contain a Dwight Howard for 48 minutes, but don’t expect Howard to have his best game that night either.

LeBron is 6’9″ and 265 pounds (I say 280) and he may be the fastest man in the league, as well as the quickest. To be that strong and agile, he can bang with the big boys and keep the small guys in front of him. Jordan couldn’t hold down Karl Malone, he couldn’t attempt to hold my man, Patrick Ewing, or Hakeem Olajuwon in the paint, he would get pounded down there. Wilt Chamberlain wouldn’t want to guard Walt Frazier or Earl Monroe on the wing, he would get burned worse than those pieces of bread crust that get stuck in the bottom of the toaster. But if it was LeBron, we could see him sticking those guys from out in the perimeter.

LeBron James could hold his own in any scenario, against any player, in any time period.

On the other side, offensively, LBJ has elevated his game and diversified like a healthy stock portfolio. His post game is top-notch and he shoots 40 percent from three-point range. LeBron handles the ball like a point guard and he has the best court vision in the game right now—no offense to Chris Paul or Rajon Rondo, but let me repeat, LeBron James has the best court vision in the game today. He cannot be stopped, by anyone, anywhere. Guys may play good defense on him (see: Jimmy Butler, Paul George, Kawhi Leonard), but his strength wears them down in the end and, by the fourth quarter, they’re all beat up and battered after dealing with LBJ all game. He scores from long-range, from mid-range and from the post, and he does it with ease. It’s a thing of beauty to watch and a nightmare for opposing coaches.

So, basketball is about scoring and playing defense. If I had to pick one player to play all five positions on my team, I’m picking No. 6, no doubt about it. He’s got the second championship of many more to come, and another NBA Finals MVP. You better believe that I’ll have five LeBrons out there and we’ll win because the man can, and has, done everything on the court, everywhere.

In the end it was a great effort by the San Antonio Spurs. This season was one of the most exciting and captivating seasons that we’ve had in a long time. I feel great about the direction the game and the league are headed. There are so many great players in the game right now, and many more to come, so next season is already shaping up to be amazing. There’s always something new coming into this league of extraordinary gentleman, but this I know for sure, LeBron James is king of them all, and there can only be one King.