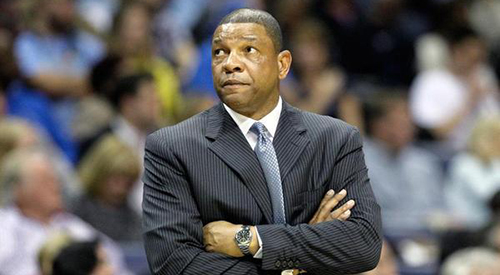 Goodbye, Doc Rivers. You will be an asset to the Clippers in Los Angeles.

Yes, after a weird week or so of the Los Angeles Clippers and the Boston Celtics playing the classic “Will They/Won’t They?” and ESPN drooling over them like a “Friends” fanatic over Ross and Rachel, the Celtics have snagged a first-round draft pick for Glenn Rivers, M.D., Doctor of G … What? I’m being told that Doc Rivers is not an actual doctor. My mistake.

So who is going to fill this new position? The Celtics say they want to save money and not splurge for any big names, so don’t expect either of the Van Gundys or George Karl; Tyronn Lue and other logical in-house choices are likely to follow Doc Rivers to L.A. So, with that in mind, time to break down the new candidates:

Lionel Hollins
Yo, Memphis Grizzlies, what the hell, guys? When someone leads you to the best season in the history of your franchise, you reward them. But with egomaniacal GMs running the show, even the best coaches are never safe if they don’t have a ring. And even then, their job is still fairly precarious. Still, one team’s loss is another’s gain: Lionel Hollins took a team that had never won a playoff game since its inception and brought them to the Conference Finals against the San Antonio Spurs. If that isn’t good coaching credentials for a rebuilding squad, I don’t know what is.

Brian Shaw
A name better-known to most lawyers than casual basketball fans, The Boston Celtics v. Shaw is a famous case that Shaw lost in which he tried to go play in Italy while under contract with the Celtics. Long story short, Brian Shaw had a less than graceful bow out of the Celtics organization. Still, Shaw is an up-and-coming assistant coach for the Indiana Pacers and was a candidate for the Clippers job when Doc Rivers looked less likely. He has three rings with the Los Angeles Lakers, so look for his name to come up down the road.

You know, speaking of the Pacers, someone stepped down as their general manager a while ago for health reasons, but he might be feeling better. I wonder if he could coach … I think his name is Bird or something? Nah, I’m just kidding, but how awesome would that be?!?!

Byron Scott
Another coach that the Clippers were looking into, Scott is best known for breathing life into the New Jersey Nets and/or sealing the Kiss of Death on the Cleveland Cavaliers. As of late, Scott has had a hard time finding success, but all he needs is a Rajon Rondo-esque star to get started again.

Avery Johnson
An ex-teammate, friend and revered colleague of Doc Rivers. Doc expressed his shock when Johnson was fired by the Brooklyn Nets after a 14-14 start (the Celtics started 14-13). Rivers has called Avery Johnson a “terrific coach” and Johnson did take the Dallas Mavericks to the NBA Finals in 2006.

My favorite choice of all: Just after 2:00 AM EDT, a former Celtics star that played for Boston before I was in middle school tweeted basically the same thing thrice:

Boston fans I think it’s time for me to the celtics coach !!!!!

Boston fans its time for me to be the Boston coach !!!!

Boston fans its time for me to be the celtics coach !!!!

Those tweets were sent by a probably not sober fellow by the name of Antoine Walker. Yes, ladies and gentleman, Employee #8 wants to coach the 2013-14 Boston Celtics. I want to see this just for the sheer entertainment value. Let’s forget his severe financial woes for a minute and remember that Antoine Walker was once the heart of the Celtics, along with The Truth, Paul Pierce. If Rivers causes a mass migration in coaching staff to L.A., I would not mind signing Walker as an assistant coach. Just speculation.