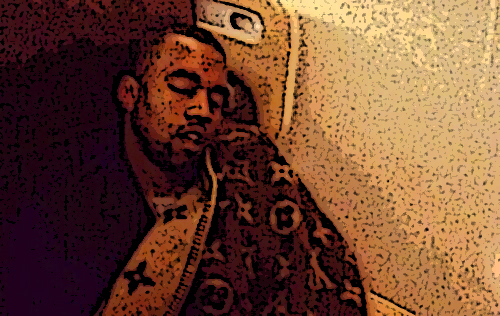 Yesterday marked the three-year anniversary of LeBron James spurning everyone, particularly the Cleveland Cavaliers and its fans, to “take his talents to South Beach,” which is fondly known as “The Decision” for Miami Heat fans. It was a benchmark moment in free agency, not just in the NBA, but all sports. It was as if Babe Ruth, Wayne Gretzky and Michael Jordan were all in their prime in an age of electronic media and instant dissemination of information where everyone around the world could realistically hold their breath at the same time in unison.

Of course, ESPN had to make money off of that collective action of anticipation, which only gave more gravitas to how important this event was because as we all know, ESPN is the worldwide leader in sports. Just ask them yourself. However, there was one man, in attendance even that didn’t give any f#^$*… Kanye West.

Here’s an account of the apparently unimportant situation from Bro Jackson’s Courtney Cox, who worked for ESPN at the time:

He whispered softly, “Kanye West is here and I don’t know where to seat him.”

Mind you, this is not long after the 2009 MTV Video Music Awards, where Kanye gave Taylor Swift the business in his infamous “I’mma let you finish” speech. All I can think about is ‘Ye approaching the set, snatching the mic and saying, “Yo LeBron. I’m really happy for you. I’mma let you finish, but Michael Jordan had one of the best careers of all time.”

So I ask the high-level face, “Are there any seats in the back we can find?” thinking that the further back he sits, the greater my chances of properly wrapping up when I tackle him on his way to the limelight. He said, “How about those three seats on the third row?”

He wasn’t seeing what I was seeing.

So Kanye walks in with no entourage, just a couple of people, and now I’m thinking he’s either here because he was at the wedding rehearsal for Carmelo Anthony and LaLa, or he was the Chicago representative picked to show out when LeBron chose the Bulls. To this day, I’m still not sure why he was in the building.

I spend the first 15 minutes or so honed in on ‘Ye’s every move. He seems chill, he’s wearing his glasses indoors, and he’s not making sudden moves. I forget he’s there until one of the camera operators says, “I think Kanye West fell asleep.”

At the biggest non-sporting sports event in a while, Kanye West fell asleep before anyone announced anything. He was doing the church/school head nod and everything. Wake up, Mr. West.

He would eventually wake up and leave well before The Decision ended.

Only someone with a ginormous ego could fall asleep at the most anticipated sports event. And for that, Kanye West is my hero.