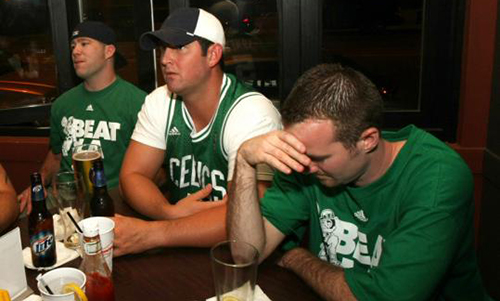 As a Boston Celtics fan still reeling from the recent implosion of one of the great Celtics eras in franchise history, I was finally able to acknowledge within myself today that I’ve fully gone through that psychological cycle described as the five stages of grief. It’s been a long process to some degree, beginning last year with Ray Allen leaving for the Miami Heat and, of course, ending these past few weeks with the departures of Doc Rivers, Kevin Garnett and most tragically of all – the Truth – Paul Pierce.

The following is an account of the process of my bereavement.

The writing was on the wall.

If you’ve followed the NBA long enough, you know that where there are rumors of acrimony inside a locker room, actual acrimony cannot be far away. Smoke, fire – as they say. There was no question, therefore, that by the end of the 2011-12 NBA season, some diminuendo of chemistry between Rajon Rondo, Doc and Ray had gotten dangerously close to its breaking point. Sure enough, the minute a decent, albeit adulterous offer came-a-knockin’, Allen was the first to scoot off post-haste – to South Beach, no less. And thus began the denial period for us poor Celtics fans. With Allen gone and Garnett and Pierce growing ever longer in their proverbial teeth, objectively there was no rational scenario in which Doc would remain very long in command of the obviously sinking ship that had become the roster. While Rivers is an elite coach and, barring his pithy, petty battles in the media with the great Bill Simmons, seems very much to be a good guy as well, he’s evidently a sensible one, also.

The Los Angeles Clippers position was just too good to pass up, yet whereas it should have come as no surprise when he finally took it, the word “surprise,” at least for me, was more than an understatement. Shock. Despair. Those words might have better fit the nature of my mood upon hearing the news.

Nevertheless! After nine seasons of loyal service – six division titles, three Conference Finals, two NBA Finals and, in 2008, one glorious title run – I… we… yeah, we should all be grateful. We were, though! I mean, we are! We really, really are!

Still… say it ain’t so, Coach!

I suppose after the championship, what happened was our gratitude progressively began to mutate into a kind of possessiveness of Doc – the sort of noble yet crooked entitlement, characteristic of any true Boston sports fan. The man simply wanted to go – he had to go. It was time and by the end of this past season, in our hearts of hearts, we all knew it to be true. Still though, not until the press conference where, once and for all, he held to his chest that abhorrent red and blue jersey the Clippers’ brass had emblazoned with his old number 25 did our intense pride quit assuring us the spirit of Beantown would ever ultimately compel him to stay.

Honestly, I’m not sure how blasphemous this is to say, but I’ve always thought Ainge seemed like a spineless, sinister little brat. Although I was but a weanling fan during his playing days, I remember watching him on the floor with the original Big Three – Kevin McHale, Robert Parish and Larry Bird – and secretly wishing Dennis Johnson would maybe just clone himself to run the point as well as the off-guard position. I never liked Ainge’s sycophantic posture, both on the court and on the bench; his scuttling around; his profiting off Bird and McHale always being double-teamed. In essence, he just bugged me.

Eventually, sadly, that era was no more and in 2003, none other than Danny Ainge became the Celtics’ Executive Director of Basketball Operations. Under his administration, the franchise proceeded to lurch its way through four moribund years before finally lucking into a ludicrous trade with Kevin McHale – then the GM for the Minnesota Timberwolves – for one Kevin Garnett. Adding further to this hoopla of fortuity, the Garnett trade took place not long after Jesus Shuttlesworth himself, Ray Allen, had been acquired from the Sonics for Wally Szczerbiak, Delonte West and the soon-prodigal-anyway rookie, Jeff Green – all of whom had either already proven or didn’t yet need to prove, in one form or another, to be dispensable.

Effectively then, in 2007-08, the Cs were back and as fans, we enjoyed thereafter our team’s fruitful six-year run (even if it did peak too early with the one championship). Yet all the while, the fact remained – a fact which, when pressed, everyone sooner or later is forced to admit… nothing lasts.

That said, while talks about rebuilding were beginning to stir on Twitter – as well as ESPN, NBA-TV and just about everywhere – that aforementioned very logical point in fact was simply neither here nor there. Who the hell did Danny f*^#ing Ainge think he was, anyway, relinquishing Doc – and to Los Angeles of all places?! Moreover… NEWSFLASH… as Celtics fans, we don’t care that it’s the Clippers and not the Lakers… L.A. is goddamn L.A.!

But anyway, once Doc was gone, the writing that had already been on the wall the whole year prior came finally into focus and I could sense this was only the beginning. Rumblings about Pierce and Garnett joining their now former coach in L.A. were only serving to add more fuel to the bonfire of my ire and, when on draft night, it became evident they were actually probably going to be heading to Brooklyn, it was still all I could do to stay calm and focus on the broader implications of the evening’s fusillade of trades, as well as where all the lottery picks were landing.

I had a dream that night – after going to bed, dazed and confused, somewhere during the second round – wherein Red Auerbach not only rolled over in his grave, he catapulted out of it, tracked down Ainge and bareknuckle-knocked him the hell out without so much as saying boo. The assault, apparently, had little or no effect in waking life, seeing as by the time I woke up, it was confirmed. The heart and the soul of the Celtics – the Big Ticket and the Truth – were both now Brooklyn Nets.

And to make matters so much worse, I currently live in bloody Brooklyn!

What if…? What if…? Well, at least we still have Rajon Rondo.

Sure, we still have Rondo, but for how long? Is it worth it to keep him? In all honesty, even if Rondo hadn’t been drafted to don good-guy green and white, he might still be my favorite point guard in the league. Did KG and Pierce and Ray and Doc have a lot to do with his development? Would he be half the player he is today without the benefit of having come up under their impact and guidance? Yes, no… who knows? That’s grist for the mill of a different article altogether. The essential question is: What will be his role in, as quickly as possible, restoring the buzz of having a championship contending Celtics team?

Should we trade him and tank for Andrew Wiggins? Hmmm…

Would it be wise to give him Derrick Rose-like authority over the moxie and morale of the team? Uh…

Could we just hang on to him, but keep him in street clothes for most of the year by exaggerating the nature of his knee injury, thus tanking for Wiggins? Shaking my damn head…

But can Doc and Pierce and Garnett just come back now? Please? We’ll do anything? Fab Melo? You can have Fab Melo… Danny Ainge, too!

Great. I just landed this sweet gig writing for an awesome new NBA site (Baller Mind Frame, of course) – ostensibly for my beloved Celtics, but now they’re one of the worst, most uninteresting teams in the league. Isn’t that just a scorpion in the sheets..

I realized I’d have to in some capacity occupy myself with other things – the foremost of which became to consider following through with an idea I once hatched a couple years ago. Somehow, I’d acquire the footage of every single game Michael Jordan ever played, watch each of them in their entirety and then write a book of 500 word blurbs analyzing his part in every contest. After doing the math – if he played 1,072 total games, at an average game-viewing time of about an hour (with the ability to fast forward through time-outs and such) – it amounts to what would then be around 1,072 straight hours of watching. If I watched an average of four games a day, that’s 268 days. Therefore, in less than a year I could have a pretty remarkable piece of literature!

See how depressed I am?

All I wanted was to glorify a great Celtics team – the very Celtics team I’d been watching go to battle with one another for the past six years, but no. No, now I’ll have to quibble over Kelly Olynyk’s upside or whether or not Jeff Green has or will ever reach his full potential. Or asking, does Brad Stevens have what it takes?

Suffice it to say, these past couple of weeks – when it comes to my Cs – I’ve felt all but completely dead inside.

And I’ll tell you – the moment I realized it was in fact fine was a few days ago, watching the Celtics Summer League team absolutely destroy the Detroit Pistons’. Did it give me pause to think that maybe, just maybe, we’ll be a really good team this year? No, it did not. Was I overly impressed with the collection of unpolished talent Boston had on the floor? No, I was not. While Olynyk does look as if he could turn out to be a nice piece, other than that, I was relatively uninspired.

Actually, the feeling of which I speak – contentment, acceptance – washed over me in a kind of mystifying wave around the start of the second quarter. I saw this bunch of unfamiliar guys, most of whom won’t ever get a real shot at playing in the league, all wearing Celtics gear. I saw them playing professional-level basketball – playing their asses off, too, and at a vantage so much more up close and personal than we’re afforded while watching regular season games on TV (which is the great thing about watching the Summer League – the cameras are on the same plane as the players and basically right at courtside). I thought to myself, “Man, no matter how it’s sliced, look at this incredible sport – the grace and power of its athletes – what a beautiful thing it is, to just sit back and watch, no matter the context. No matter that my hometown team is going to, at least this year, probably be a bottom-dweller in the standings.” I thought about BASKETBALL – how much I genuinely love it – and no kidding, everything in that moment and since, when considering the upcoming NBA season, has categorically been all good.

The Celtics will rise again, no doubt – even despite Danny Ainge – and when they do, I’ll be there, taking every opportunity under the sun to glorify the roster, the coach, and most importantly, the franchise itself.