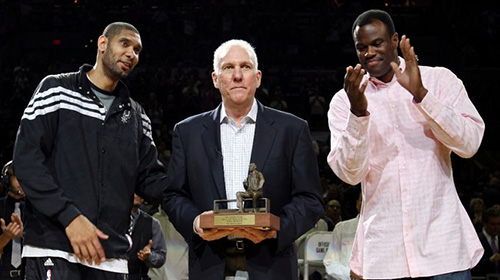 When I reflect back on what the San Antonio Spurs once were and juxtapose that with what they’ve become, I can almost feel the onset of a brain bleed. As a kid growing up in the 1970s, I was a fan of both the NBA and the ABA. As such, I enjoyed the free-wheeling, fast-breaking, fresh-off-the-blacktop style best exemplified by the ABA’s runningest, gunningest squad: the Spurs. Watching the black and silver since the Tim Duncan Era began, it’s almost impossible to believe that San Antonio was once the final frontier for the most entertaining show the hardwood had to offer. If you wanted non-stop transition basketball played with very little defense and games routinely reaching the 130s (and often the 140s), the old HemisFair Arena is where it all went down.

Though the Spurs’ high-wire act began in the ABA, my most vivid memories are from after the merger with the NBA in 1976. Those teams were led by “The Iceman,” the great George Gervin. Some of the other names from that era include Larry Kenon, Rich Gale, Billy Paultz and Mark Olberding. And though those Spurs teams never won a championship, they were perennial 50-game winners who made the playoffs every year (To my fellow long-suffering Phoenix Suns fans: doesn’t that sound familiar?).

Throughout most of the 1980s, San Antonio was an NBA non-entity until David Robinson was plucked from the Naval Academy and joined the team in ’89. Led by the Admiral and featuring teams that included the likes of Sean Elliott, Rod Strickland, Terry Cummings and Willie Anderson, the Spurs rose once again to become an NBA power. At that point, San Antonio wasn’t much different from a host of other good teams led by a great player… until the 1996 season that found Robinson breaking his foot and missing 76 games in a lost season that ended with a 20-62 record. Early in the year, the Spurs President of Basketball
Operations, a man by the name of Gregg Popovich, fired head coach Bob Hill and took over the reins himself.

And with that fateful decision, the Evil Empire of the NBA was born.

Now with Darth Popovich at the helm, phase 1 of the Spurs plan to rule the league through the use of “Blandball” was firmly in place. The following season, as a result of their putrid year in ’96, the Spurs received the first overall pick in the ‘1997 NBA Draft and used it to select Duncan, the Wake Forest big man and obvious best college player in the country. Phase 2 now in effect. With the twin towers frontline of a now-healthy Robinson and Duncan, San Antonio rebounded to win 56 games in 1997. During the 1998 lockout-shortened 50 game season, the Spurs won their first ever title, steamrolling an overmatched New York Knicks squad playing without an injured Patrick Ewing. With title number 1 secured, Duncan was displaying the form that would not only garner him recognition as the best power forward in league history, but also earn himself the nickname “The Big Fundamental” (I believe Mr. Shaquille O’Neal deserves credit for creating that moniker).

When Robinson retired after the 2002 season, Duncan became the face of the franchise, completely exemplifying the Spurs corporate, systematic, generic, antiseptic, no-individuality-having image. All my words, by the way. If Timmy and the Spurs were an ice cream flavor, they’d be Triple Vanilla Deluxe. With extra vanilla. Things got worse, much worse in ’01 when San Antonio drafted “The French Pastry,” Tony Parker and then followed that up in ’02 by adding future flopmaster supreme, Manu Ginobili. Now the Spurs had their very own Big 3: a power forward who plays like a center and whose pet move is a bank shot, a little jitterbug point guard who can’t touch the rim and a shooting guard known as much for his willingness to use his elbows and knees on drives to the hole as for his actual skill set. With the machine now fully equipped and ready to roll, NBA titles followed in ’03, ’05 and ’07.

What made those championships so galling to me is that I’m a Suns fan. I don’t need to recount how my team was tortured and eviscerated so many times by the black and silver cyborgs so many times in the playoffs. Nor is it necessary for me to go into any great detail about the therapy sessions I sought out right after Robert Horry hip-checked Steve Nash and the Suns right into the offseason in ’07 just as Phoenix was on the verge of finally beating them. When Phoenix DID beat them in 2010 on their way to a Western Conference Finals appearance, they exorcised those San Antonio demons with a stunning and emphatic four-game sweep. Only then was I able to fire my therapist and discard my last bottle of Ritalin.

What should be clear by this point is that I despise the Spurs.

And not just for what they’ve become, which is the hoops equivalent of the New England Patriots, whose Tom Brady is what Duncan is to the Spurs: great players who pride themselves on their buttoned down, “company man” image, leading great teams that typically win without flamboyance or style while giving the media interviews chock full of the drivel scripted by his teams’ PR department. But the larger part of my disdain stems from my memories of what the Spurs once were so many years ago; the old Spurs were FUN. The old Spurs were a hot, lazy July afternoon on a blacktop in Queens. Playground ball. Winners stayed on. Losers went to the back of the line. The old George Gervin Spurs were “I got next.”

The current Tim Duncan Spurs are the cure for insomnia. I imagine that this is a trade-off that San Antonio fans will gladly make – the 70s teams never won anything while now Spurs backers have four titles to flaunt. As for myself, i’ll grudgingly cling to the past and continually reference those beautiful memories of old San Antone, while I count down the days until the Big 3 ride off into the sunset.

Duncan is in the final year of his contract and Ginobili has two years left. Parker is a bit younger but by himself, he’ll be much more tolerable. Make no mistake here: I respect the Spurs and recognize their greatness. Until they inexplicably choked away title number 5 (thank you, LeBron James and Ray Allen) against the Miami Heat this past June, they had been flawless in the NBA Finals. When it’s all said and done, they will go down in NBA annals as one of the league’s greatest teams. i dispute none of that.

Now let’s look forward to the post Evil Empire era when Popovich and Duncan are filling their days doing something else and the Spurs can remake the teams’ image. Who knows? Maybe they can put together a squad more closely resembling their ABA predecessors. Yes, I can see the TV promos in my minds eye right now: “….Kawhi Leonard leads the San Antonio Spurs with head coach George Karl against…”