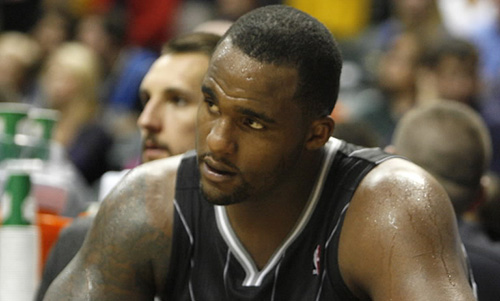 After two up-and-down seasons with the Orlando Magic, Glen Davis could be on his way out. Davis was acquired by former general manager Otis Smith to try to appease Dwight Howard’s wants while he was still with the organization. When Smith was let go, and Howard was traded, Davis was one of only four players that was not sent out when Rob Hennigan and company took over.

This past week the team announced that it would sign free-agent power forward Jason Maxiell to a two-year deal. The signing of the veteran Maxiell adds to an already crowded frontcourt, and could point to the end of Davis’ tenure with the team. Davis has become a fan favorite with his hard worth ethic, they would find themselves in the same boat with Maxiell.

Davis and Maxiell both share a similar skill set and work ethic on the court. While both are undersized, they, Maxiell more than Davis, aren’t afraid to go down low and bang with the big bodies in the league. Offensively, both players can score when they want at the rim, but tend to settle for jump shots outside of eight feet.

With two years and $13 million left on his four-year deal, Davis currently has one of the heftiest contracts on the team. While moving Davis wouldn’t be an easy task for Hennigan, Hennigan has shown a resiliency and ability to get the best deal possible. The real question that remains is: who would take Davis from the Magic?

It could be tough to find someone willing to take on Davis and the money remaining on his deal. The best fit for the veteran forward would be on a playoff team that is looking for added frontcourt depth. The hard working Davis would bring not only a toughness, but some more veteran leadership to a contending team, so if Davis isn’t trade sooner, a deadline deal to a contender could be possible.

At the end of the day, the Magic’s logjam and the need to get their young players some burn should come out on top. It’s unclear if the team actually will move Davis, but surely he could still help out a contender, something the Magic likely won’t be doing this upcoming season.