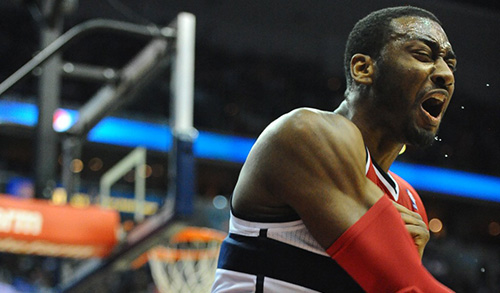 In the midst of five consecutive losing seasons, and the fact the team did very little in free agency this offseason, it may be hard to imagine why the Washington Wizards and their fans have any optimism coming into the 2013-14 season. Well, if you look at it closely, it’s really quite simple. It’s point guard John Wall.

Last season, the Wizards played their first 33 games without Wall while he recovered from a stress fracture in his left knee. Their record during that time was an abysmal 5-28. Then on Saturday, January 12th, 2013, Wall returned to the lineup for the first time, against the Atlanta Hawks. This game was the team’s first since their stunning upset of the Oklahoma City Thunder, which along with Wall’s return, seemed to finally give them a jumpstart.

That cold January night sparked something in the Wizards that resonated with them for the rest of the season. Including their 93-83 win over Atlanta that night, the team went on to play .490 ball, going 24-25. Based on how the rest of the teams played last year, a .490 winning percentage would have put the Wizards in the hunt for the 7th seed in the Eastern Conference. So can one man really make that much of a difference?

Well, there are several reasons why I say, “Yes, he can.”

First off, the Washington Wizards are a good defensive team with or without John Wall. The team is coming off a season last year where they ranked 8th in points against and 4th in field goal percentage against. With every important piece returning, there is no reason to expect much different from this year’s team. In fact, with Wall’s ability to play passing lanes and create turnovers, the Wizards may even rank higher in total defense this year.

Next, the Wizards proved to have a more efficient offense with Wall in the lineup last season. With Wall on the court, the team averaged about seven more points per 100 possessions and upped their scoring average from 89.2 points to nearly 96 points. In addition, the Wizards offense saw better production from their three-point shooters with Wall in the lineup. Specifically speaking, Bradley Beal and Martell Webster saw their long distance shooting climb over 45 percent with Wall on the court. Wall’s ability to get out in transition or penetrate the defense in the halfcourt, enabled the Wizards shooters to spot up behind the arc for good looks. I suspect this won’t change much this year, especially with the addition of third overall pick, Otto Porter.

My third point of emphasis regarding the Wizards likely playoff run has very little to do with the Wizards themselves. Looking at the Eastern Conference as a whole, there are four teams that standout from the rest as we enter the new season. In my opinion, those teams are the Miami Heat, Indiana Pacers, Brooklyn Nets and New York Knicks. Looking past those four teams, I don’t see one other team that has an overwhelming advantage over the Wizards to make the playoffs. The Chicago Bulls are a big question mark with Derrick Rose and his health; the Milwaukee Bucks acquired O.J. Mayo, but lost Monta Ellis and sharp-shooter J.J. Redick; the Boston Celtics will fall off significantly with the departure of Paul Pierce and Kevin Garnett; the other playoff team from last year, the Atlanta Hawks, lost their best overall player in Josh Smith. There should be some playoff spots to fill, so why not last season’s late-emerging team in the Washington Wizards.

The biggest obstacle the Wizards have to overcome to be a serious playoff contender in 2013-14 is the health of John Wall. Wall has missed 62 games over the past three seasons with various injuries, so concerns about his health are legitimate. If he can find a way to stay on the court though, and continue developing a rapport with his teammates, there is no reason this team shouldn’t be in the playoff hunt. They have nearly everybody back from the top ten defense of last season; they have the size and scoring down low with Nene and an underrated Emeka Okafor; they have the perimeter shooting with Martell Webster, Trevor Ariza and, likely, with Porter; they have an up-and-coming star in Wall’s backcourt-mate Bradley Beal.

So, how bad do you want it John Wall? At the time of this article you’re on the brink of a five-year contract extension worth an estimated $80 million. You have young talent around you, with veteran leadership and a fanbase that is dying for a winner. There are no more excuses John. You have the backing of the team and the town, now it’s up to you to show you’re worth max money. It’s time to lead this team back to the playoffs for the first time since the 2007-08 season.