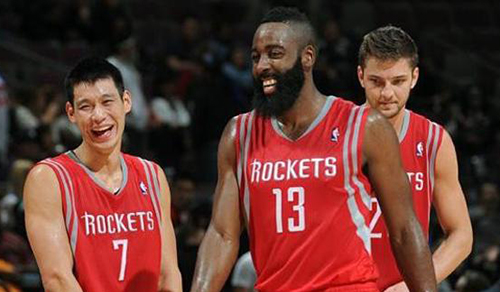 I hate to prolong the Dwightmare any further, but as a bitter Los Angeles Lakers fan trying to satiate himself with signing unproven talent on minimum contracts, I’m desperate for some grins and potshots at a favorite punching bag. Yeah, that will do just the trick.

At the beginning of free agency, when we first learned to fear the swaying power of the Houston Rockets’ youth movement, word leaked that Rockets forward Chandler Parsons texted back and forth with Dwight Howard, advising him on the decision. In a recent interview, Parsons revealed further that he and Howard spoke over the phone almost nightly and texted every day. He emphasized the communal spirit of Houston, the college team vibe shared by James Harden and Jeremy Lin, and the potential for Howard to take them to the next level.

A canny recruiter, Parsons played into every one of Howard’s main concerns. Howard’s biggest complaint in Los Angeles seemed to be the friction between him and Kobe Bryant, the fierce lion king who would not yield dominion over the pride. Instead of welcoming Howard with open arms, praising his talent, and buddying up off the court, Kobe stuck to his guns and expected Howard to wise up and follow suit. When Howard whined about the lack of friendship to local media, Kobe’s response was a terse reminder that he was in the game for rings, not playpals.

In stark contrast, Parsons came to Howard as a friend first, teammate second. Promising the kind of camaraderie and locker room hijinks Howard hasn’t seen since his early years in Orlando. The overgrown adolescent in Howard wants to win, but more than that, he wants to have fun. This isn’t necessarily a convictable offense; there is nothing inherently wrong in seeking joy in your profession. That said, in a game emphasizing personal will and dedication, perhaps the big man’s priorities are as skewed as his free throw stroke.

While the Rockets may not play the post-up heavy offense Howard professes to prefer, the personality mix is precisely what he wanted all along: a good team that will yield to his leadership. He wants to be doted upon, centered around, but with enough surrounding support to share the spotlight and diffuse responsibility. With the Lakers, Howard was vocal about more ball share, insisting that he deserved more shot attempts, yet he wilted when the team needed him most, looking to Kobe to close out games.

Much of that deference comes from Kobe’s well-noted ballhogging ways, but Howard remains a far cry from a clutch performer. As Harden, Lin and Parsons are all capable playmakers, Howard doesn’t need to worry about shouldering all of the offensive responsibility a franchise player usually carries. If and when disaster strikes, Howard won’t be the lone media lightning rod.

Enough reality based analysis. How about a little creative speculation?

Lin: Thanks for letting me crash again man. I swear, next season I’ll find a place.

[Harden silently combs his beard, staring off in contemplation.]

Parsons: Yeah, about that. I don’t think you can stay at my place next week. I’ve, uh, got plans.
Lin: Plans?
Parsons: I’m going fishing. With the Big Guy.

[Lin crosses his arms and pouts.]

Parsons: Don’t do that. You know how much you mean to me. It’s just, Dwight needs me right now. You saw how fragile he was in Los Angeles-

Howard: Fragile? Los Angeles?
Parsons: Yeah, we were talking about Kobe, how threatened he was by you.
Howard: Of course he was, I’m the greatest. Who wants a marshmallow? I brought a whole bag. Skittles too. Sometimes, I’ll fill the marshmallow with the Skittles. I call it a rainbow surprise.
Parsons: That sounds great, Dwight.
Howard: Kobe didn’t like them. You want one, Jimmy?

Howard: Chandman, why doesn’t he want one? He doesn’t like me or something? I knew this was a mistake.
Parsons: He likes you, he’s just- James. James!

Harden: What?
Parsons: Eat a rainbow surprise.
Harden: Dude, I had three. I’m grooving enough.
Parsons: No, one of Dwight’s candies, his Skittle marshmallow thing.
Howard: Rainbow surprise.
Parsons: His rainbow surprise. Just take one.
Lin: He never tried my vermicelli.
Parsons: Not now, Jeremy.
Howard: I changed my mind. If he doesn’t want one, I don’t want to give him one.
Parsons: Dwight, of course he-
Howard: He’s a big stupid head and I don’t like him.
Parsons: Damn it, Dwight, will you shut up for just one second?
Howard: You shut up. I’ve had it with you guys.

Parsons: Wait, Dwight, I’m sorry. Stay, please.
Howard: It’s too late. I don’t need you, you’re all a bunch of jerks. I’m outta here.
Parsons: You just got here. You signed a four-year contract.
Howard: How far is it to Dallas?