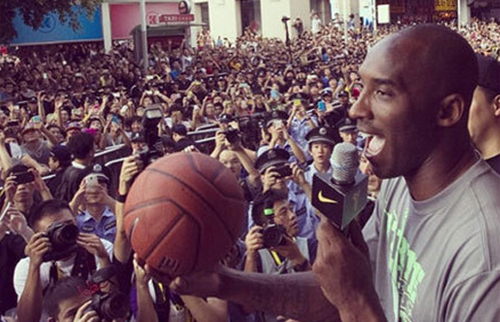 America has had an on-again, off-again relationship with Kobe Bryant, loving him as a precocious rookie and afro-sporting high-flyer, marveling at his dominance with Shaquille O’Neal throughout the Three-peat, despising him during his trial in Colorado and fallout with Shaq, rejecting him as a selfish player and toxic teammate in the mid-2000s, coming around to his individual greatness with his MVP, and ultimately loving him again as a positive role model and proven champion. Not all of us rode the same rollercoaster—don’t worry Kobe, I had your back the whole time—but the American public and media took a long, twisty road to the acceptance of Kobe as one of the all-time greats.

Despite his trial and ensuing domestic turbulence, Kobe’s image abroad soared with every championship, trophy and record. All over the world, Kobe became the top jersey seller and face of the NBA’s international outreach. In win-driven China, they took a special liking to the fanatical Black Mamba, admiring his killer instinct and endless dedication to triumph.

On a recent public relations tour, Kobemania hit an all-time high at a pep rally held in Hong Kong. After welcoming cheers and screams, the MVP of the youth league asked Kobe one question, through a translating host: “When you are suffering from injury, how do you maintain your level on and off the court?”

Smart kid. In one query, he nailed the heart of Kobe’s appeal, how he’s earned our respect and solidified his historical reputation: his ability to overcome any and every odd. He spent most of 2007 with an adjusted stroke because of an injured pinky on his shooting hand. Two years later, he fractured another finger and carried on to win a ring. After tearing his Achilles, Kobe returned to the line to sink two free throws before hobbling off the court. While I pray that none of these inhuman trials of perseverance leave Kobe with long-term handicaps, I almost admire him more when he’s playing through the pain.

Back to the rally. Kobe’s response to the kid was vintage Mamba:

“Because it’s a challenge, so like right now, when I’ve hurt my Achilles, I look it as a challenge. When I get up, it’s very easy for me to be motivated, to train, to get ready, to come back. Especially when people say you can’t do it. It gets you more motivation. That’s why I can walk around now and bounce on my toes.”

He emphasized the last line with a few springs, eliciting another roar. For a follow-up, Kobe signed a series of balls and lobbed them into the stands, the first bouncing off outstretched hands and falling to one of the few white foreigners present. Another fired to a teenager’s bobbling grip, inciting a brief wrestling match over the prize. On the other side of the court, a clean catch brought forth an enthusiastic fist pump and round of high fives. These kids were jazzed, beyond thrilled, to be in the presence of the man, the myth, the legend: the Mamba.
What’s the next stop on the Kobe Dominate the World Campaign? I’m glad you asked.

At the World Cup, Kobe and Lionel Messi teams up to debut a cross of a basketball and soccer ball, performing an exhibition of juggling and dribbling tricks in a whirring back and forth. The demo ends with a soaring penalty kick from Messi that Kobe converts into a shattering alley-oop at the rim. Though the product fails to sell, video of the event temporarily breaks the internet due to bandwidth demand.

Every year, the American team decimates the Olympic basketball competition, with only a few teams (I’m looking at you, Spain) putting up much of a fight. Let’s spice things up with an exhibition match between Kobe and a non-qualifying team, let’s say New Zealand or Mexico. To be clear, the game will be Kobe versus their entire squad, one-on-five for forty minutes. Can Kobe do it? The smart money’s on yes.

I’ve discussed this on other outlets, but it deserves further mention. Following Jay-Z’s forays into sports management, Kobe and Kanye West will team up for the World’s Greatest Tour, a traveling arena show fusing hip-hop hits and basketball acrobatics. Can’t miss.

Having conquered the human race, the next logical step is the animal kingdom. While a number of beasts would make worthy opponents for the Black Mamba, there is only one correct answer: the king of the jungle. The specifics of the contest need working out, as one can’t very well expect a wild cat to pick up on the intricacies of one-on-one. Maybe you fill the basketball with raw meat, provoking the lion to play defense, and force Kobe to use his footwork and lane gymnastics to evade the beast and take it to the basket. Yeah, that makes sense.

It’s been a long time since America staked claim on the moon and we’re long overdue for another visit. Apollo 14 featured Alan Shepard attempting a golf shot, but we can do better than that. On our next mission—or the one after, no rush—bring Kobe aboard and let him complete the first lunar dunk, a truly gravity-defying slam. There is no one more qualified. NASA, get on this.