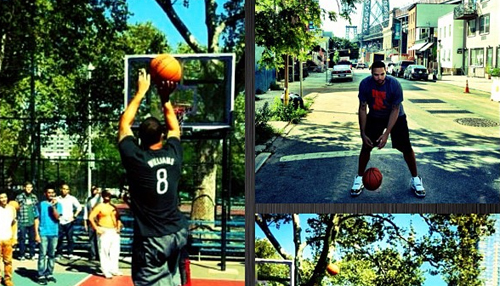 This is a game of seconds. One second you’re on top of your game and everybody loves you; the next second you get injured or you just lose your focus and your mojo goes out the window. Some players never make it back and slowly fade away (see: Sam Bowie). Others take the challenge head on and battle back to relevance (see: Grant Hill). The following NBA players were expecting great things last season, but due to injury and other factors, they fell short. Now they have something to prove.

10. Eric Gordon, SG, New Orleans Pelicans
Ever since Gordon changed scenes from LA to NOLA he’s played in nine games his first season and just under half of the games this past season. He is an explosive scorer with a brand new team either way you look at it. With the new players picked up in the backcourt, Gordon is going to be fighting for minutes or packing his bags. The skill is there, so he will just have to produce, wherever he calls home.

9. Deron Williams, PG, Brooklyn Nets
Three years ago he was in the conversation about the league’s number one point guard. Last season he was in conversations about players that disappointed. We know what he can do on the court and now he has a few new Hall of Fame teammates to help him get back to where he should be. Kevin Garnett on the team makes him tougher by default. Also Paul Pierce is a late game option to alleviate some of the clutch headaches D-Will has had. He’ll be shooting to get back to the top of the point guard list next season.

8. Rajon Rondo, PG, Boston Celtics
“Raging” Rajon Rondo went down at the worst time for the Celtics last season. It was clear that without him the Celtics were nowhere near the champions they once were, especially with a certain Mr. Shuttlesworth moving down south. Those glory days are gone and Rondo has the team all to himself now. He was a triple-double machine before, and now he’s got the total green light to score. With Jeff Green as his wingman, some young talent, and a farm fresh coach, he’ll be looked at to do everything. I’m sure he doesn’t mind. Watch out.

7. Amar’e Stoudamire, PF, New York Knicks
This is it for STAT. The stage is set. It seems like only yesterday that the baller formerly known as Man Child was scoring buckets, getting love and all the praise from the New York Knicks faithful. Now he’s been getting the brunt of the blame for Knicks troubles. His progress was stunted last season with troublesome knees, but he feels those troubles are over. If that holds true, then New York will be in a much better place than many believe. He still has the ability to score and he will be vital in the playoffs against the other bigger teams in the East. Let’s go Knicks!!!

6. Andrew Bynum, C, Cleveland Cavaliers
Dear Philly, thanks for your support in rehabbing Andrew Bynum. He will be a great addition to our future plans here with the Cleveland Cavaliers. So sorry he couldn’t play one minute for you last season, but we will be sure to give him plenty of time with our All-Star point guard and our number one pick in this years draft. We’ll send you pictures and a bobble-head. Sincerely yours, Cleveland, Ohio.

5. Kevin Love, PF, Minnesota Timberwolves
Love was playing at an MVP level before his unfortunate series of events that would rival Lemony Snickett. He could average double-digit rebounds sitting on the bench. He’s a power forward who won the three-point shooting contest. The Minnesota Timberwolves’ plans were shot down by injury last season and they are looking to regain the momentum they had before things went sour. Kevin Love will be the center of the plans and he’ll be ready to deliver.

4. Russell Westbrook, PG, Oklahoma City Thunder
Watch out Patrick Beverly, or anyone wearing a Patrick Beverly jersey, or anyone named Patrick or Beverly. Before Westbrook went down, the Oklahoma City Thunder were all but a lock for the Western Conference Finals, and a rematch of the previous season’s NBA Finals. After Westbrook went down, OKC struggled in closing out the Houston Rockets, and eventually lost in the next round against the Memphis Grizzlies. Westbrook just proved to all the naysayers how important he is to that team and where they would be without him. He’s going to be extra pumped-up next season. Watch out Patrick Beverly.

3. Dwight Howard, C, Houston Rockets
It seems like the “Dwightmare” is over. After almost three years of drama, Dwight Howard has found a home he is happy with. Superman is now Rocketman. He had an “off” season but, to his defense, his faulty back and shoulder seemed to be his Kryptonite. With the offseason to heal and what he feels is a fresh start with the Rockets, D12 has a brand new group of friends to hang out with. James Harden is a budding megastar and the supporting cast is solid, young and exciting. It’s all smiles in Houston… for now.

2. Derrick Rose, PG, Chicago Bulls
The former NBA MVP was under scrutiny for not coming back to play last season, even after he was medically cleared to do so. But it’s his final decision and he decided it was best to sit out. He will be refreshed after resting for a year and that’s scary for one of the most explosive players we have ever seen. He will be looking to return to MVP form for a team that was extremely tough even without him. Chi-town welcomes back their prodigal son with open arms.

1. Kobe Bryant, SG, Los Angeles Lakers
The Lakers need to go ahead and build Kobe his statue right now and get it over with. For a team that was all but eliminated from making the playoffs, and steadily losing ground to the in-town little brother Los Angeles Clippers, Vino showed why he’s legendary. Kobe elevated his game, putting up historic stat lines to lead his team’s charge to that eighth and final playoff spot. All it cost him was his Achilles. But if we know anything about Kobe “Bean” Bryant it’s that nothing can stop his drive, not even injury. He recently described his rehab as “shattering recovery time for an Achilles injury.” I’ll bet you he’s thinking about dunking on Dwight Howard like this while he works out. Vino, bellissimo!

Shoutout Alert… I want to give a most special sincere shoutout to Mrs. Gloria Taylor who recently passed away. She was a loving Wife, Mother, Grandmother, Great-Grandmother, Sister, Aunt, Friend, and all-around amazing human being. She will be dearly missed and we are blessed to have come from such pedigree. We love you, Grandma. Peace.