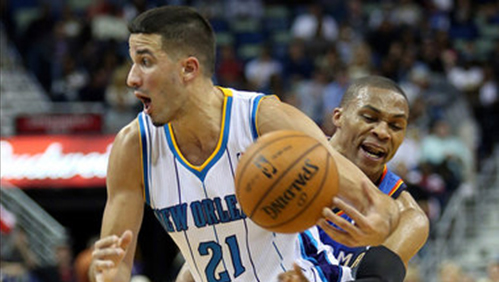 Among all the difficulties and weaknesses the Sacramento Kings have experienced in years past, one of their most prevalent struggles has been at the point guard position. Sacramento Kings fans rejoiced when the Kings acquired Jimmer Fredette in the 2011 NBA Draft. So far, that hasn’t exactly worked out the way they hoped as Fredette hasn’t produced. Jimmer’s starting spot on the team was taken over by the quick and energetic Isaiah Thomas. While Isaiah has proven himself to be a fairly talented player, he’s only good enough to get the team by, and that doesn’t cut it in the NBA. He doesn’t provide the ability to accurately and consistently dish the ball to his teammates so that they can score and take high percentage shots. He just isn’t the catalyst a point guard needs to be on the offensive end, and averaging 4.0 assists per game is not cutting it. It’s pretty clear that at the point guard position, the team is heavily lacking and it’s been hurting them year after year.

The point guard out of Maryland established himself quickly in the NBA, as night-in and night-out Vasquez displayed his ability to deliver dime after dime into small windows. It’s easy to compare his play to that of Ricky Rubio of the Minnesota Timberwolves, showing off a pass-first mentality to get teammates in rhythm. Not only do I expect Greivis to keep up his incredible passing display, but I expect his assists average of 9.0 to rise heavily when he is paired with rookie Ben McLemore. As a sharpshooter, McLemore will be a target Greivis can find for high percentage looks from midrange and downtown. In the 2012-13 season, Kings shooters, such as the struggling Tyreke Evans, were forced to throw up highly contested shots because of the lack of a producing point guard who could hit open teammates. Vasquez can be that point guard, and is looking to improve the success of shooters in Sacramento by driving to the bucket and finding players on the perimeter for easy and high percentage shots.

Another aspect of the Kings’ game, which Greivis will improve is the play of Demarcus Cousins. His poor 44.8 shooting percentage was because Cousins was forced to throw up shots that no center should have to take. Isaiah Thomas didn’t possess the ability to drive to the paint and find Demarcus for easy layups and monster dunks. A player as strong and powerful as Cousins needs to work under the hoop, something Isaiah never figured out. With Greivis Vasquez at the helm in Sac Town, Kings fans can expect Demarcus Cousins to raise his production and field goal percentage heavily. Not only will easy dunks boost Demarcus’ play, but the energy that these easy buckets will bring to the Kings each night will improve the game of all the players. Getting the team hyped and fired up directly translates into energetic play, something the Kings need desperately.

Considering all the possibilities that Vasquez brings to the optimistic Kings organization, Sac fans have a lot to look forward to. Greivis has an opportunity to be the catalyst of the team and deliver the most output as a Kings point guard hasn’t done since Oscar Robertson did way back in the day. With a new point guard at the forefront, there is no reason why the Kings shouldn’t improve mightily, but it all starts with the point guard…