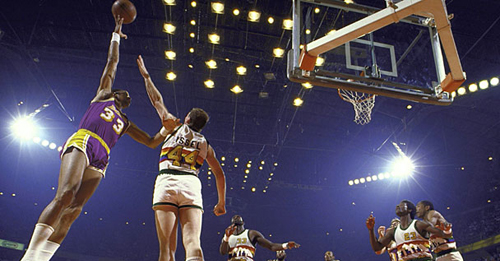 Do you know the biggest reason the Boston Celtics and Los Angeles Lakers have the most championships in the history of the NBA? If you said it’s because these franchises have drafted and assembled the most talent over the eight decades of the NBA’s existence, you’d be right. However, there is one near constant with all of the Celtics and Lakers championship teams that is more telling than drafting, trading for and signing the best players. It’s names like Bill Russell, George Mikan, Wilt Chamberlain, Kareem Abdul-Jabbar, Robert Parish, Dave Cowens and Shaquille O’Neal; it’s the center position.

The thirty-three championships that exist between the Celtics and Lakers storied franchises are filled with the best centers to ever play this game. These men were dominating frontline figures, whose mere presence on the court brought fear and extensive, yet unsuccessful, game-planning by their opponents. It was scoring on the block, rebounding, shot-blocking and game-changing plays that separated these men from their opponents.

Well, the great Celtics and Lakers teams are a thing of the past. The dominant center that became the focal point for these teams, and many others, during their championship seasons seem like dust in the wind. Though the exact reason why may be somewhat ambiguous, the fact is an NBA center hasn’t won a regular season Most Valuable Player Award since Shaquille O’Neal in the 1999-2000 season. The thirteen years between MVPs for the center position is the longest drought since the inception of the award in the 1960s.

My theory for the devalued center position can be attributed to a number of factors. For one, the NBA game is more spread out than ever before. You have great athletes who look to get the ball in a triple-threat position, where they can drive to the basket, pull up for jumpers or penetrate to draw the defense away from perimeter shooters. In order to become a larger threat, these versatile players need centers who don’t clog the lane and take away from their ability to get to the basket.

The second reason for this downfall is the evolution of the power forward. Many of the best athletes in the NBA are power forwards who have now developed comparable skills to that of a shooting guard. Power forwards like Dirk Nowitzki, Kevin Garnett, LaMarcus Aldridge and Chris Bosh all have the ability to step back off a pick-n-roll and hit sixteen-to-twenty foot jump shots. In addition, they have the body mass and physique to set hard screens and enable playmakers to get a step towards the basket. By having a position with such versatility, the big center who typically cannot hit jump shots is not needed for the most common play call in the NBA.

A third factor that contributes to the undermined center position is an evolved NBA game with less physicality. The current players in the league grew up with a game that has become highly officiated and less tolerant of hard body contact inside. Remember guys like Bill Laimbeer, Rick Mahorn, Charles Oakley, Dennis Rodman and Kurt Thomas? These guys were tough, hard-nosed players who invited physical play down low and welcomed the opportunity for a cheap elbow or body take down. Though these players weren’t all centers, the type of play they exhibited were what general managers looked for in their power forwards and centers. Do you see that in any players today?

Lastly, the emphasis on the three-point shot. Today’s game features players with specialized skills that make them one-dimensional. Among their singular skills, many players come into the league strictly as three-point shooters. If they get the ball outside the three-point arc and find themselves covered, they will look to pass the ball off, rather than penetrate to the basket. However, by featuring these players in spread offenses, point guards and playmakers can penetrate and bring defenses in the paint, which often free up these sharpshooters for open three-pointers. Why can the point guards and playmakers get in the lane so easily? Well, it’s because there isn’t a dominant center clogging the paint and blocking their path to the basket.

Listen, by no means am I saying the league is void of star centers. Dwight Howard just earned himself a 4-year, $88 million contract from the Houston Rockets. He is a force on the boards and can get points off of offensive rebounds and easy put-backs. You also have guys like Brook Lopez and LaMarcus Aldridge who can score anywhere from 18 to 23 points per game. However, these players don’t get their points from backing opponents down and scoring inside. You don’t see many turn-around shots in the lane, or strong moves on the block for easy dunks and lay-ins. These guys like to shoot outside the paint and don’t look for the type of contact that was welcomed twenty-five plus years ago.
It’s a different era of NBA basketball.

The center that plays in today’s game is responsible for getting rebounds and blocking shots that initiate a faster tempo. They are responsible for setting a screen every so often and looking for follow-up jams on missed shots. They are not responsible for carrying the team on their back and scoring thirty points a night. In many cases, you won’t even see these guys on the court when the game is on the line. The centers that play today are often poor free-throw shooters, so teams won’t even risk having them on the court.

Today’s NBA is about great athletes, transition basketball and three-point shooting. The low post figure that dominates the paint is a thing of the past.