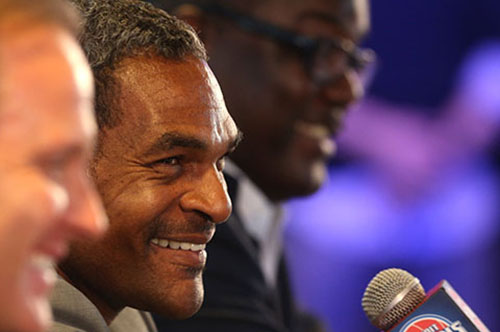 As with many other teams who were trying not only to rebuild their personnel but also their identity, the Detroit Pistons decided it was time to say goodbye to their coach Lawrence Frank this offseason. Frank’s firing was far from a surprise for most Pistons fans, who were understandably unimpressed with the paltry .365 winning percentage the team posted under his helm.

In his two years as coach, Frank failed to create a winning culture in Detroit. Equally surprising: the Pistons hired Maurice Cheeks as his replacement. Cheeks hasn’t had the greatest coaching record, but has had a past dealing with headaches like Allen Iverson as both an assistant and head coach in Philadelphia. Cheeks was initially well-liked by Iverson as an assistant, but when Cheeks became the Sixers’ head coach in 2005, Iverson mentally blocked him out. Cheeks, who was seemingly one of the only coaches Iverson was responsive to, soon found himself being ignored by the hotheaded star. The Pistons hope that Cheeks can help players like Josh Smith and Brandon Jennings put their egos aside and ball to the caliber both of those men are able to. Given Mo’s past coaching experiences, the change from Frank to Cheeks seems to be a lateral move at best.

Aware of potential ego and character issues, the Pistons also hired former player Rasheed Wallace as an assistant coach. After an injury-riddled comeback attempt last season, ‘Sheed decided to retire before the playoffs and has been looking to get a coaching job since. There is no doubt that the Pistons reached out to Wallace after they decided to enter the Josh Smith sweepstakes. While still an effective player while healthy with the Knicks, Sheed will keep Smith and Jennings in check. He may not get along with the refs but he is sure to have a positive influence toward team chemistry. It looks as though Detroit is trying to build another “bad boys” team in hopes it will revive the franchise. The hiring of Rasheed Wallace was a win-win move; even if he proves ineffective, Detroit fans will still welcome him with open arms in hope he can help kick start the team.

This offseason was successful for the Pistons. While I don’t think Cheeks is better than Frank, the roster has improved tremendously, and who can dislike ‘Sheed going back to Detroit? Perhaps the Pistons can provide something that bankrupt Detroit seems to have little of: hope. Not the hope that the Pistons will make the playoffs or the NBA Finals, but hope that former glory can be restored to both Motor City and her residents.