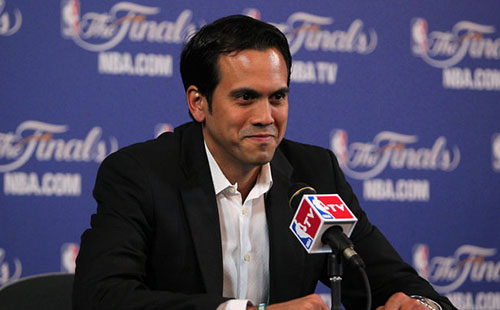 If you don’t remember where you were when LeBron James made The Decision, you at least remember how you felt. Angry, depressed, betrayed by the greatest player of his generation, who rejected your favorite team in favor a franchise that’s run by an 80s villain and dresses like the bad guys from D2: The Mighty Ducks. But perhaps most of all you were afraid.

Afraid that for as long as this South Beach juggernaut was in existence, your team was doomed to irrelevance.

Given what we know about the Yoda theorem (fear leads to anger, anger leads to hate), it’s safe to say that you also took a good deal of freude in the schauden of LeBron and company when the Miami Heat were beaten handily by the Dallas Mavericks in the 2011 NBA Finals. “There is justice in this world,” you said, “and his name is Dirk Nowitzki.”

Of course, after that Finals, everything changed. The conversation shifted from “competitive balance” to “will LeBron ever win?” and two years later, we’ve seen LeBron answer that call with the aplomb-iest of aplomb. With the Big Three having appeared in three of the last three NBA Finals, we are now so used to this well-worn Yoda cycle that we’ve never taken the time to ask ourselves: Are the Miami Heat really so bad?

As of late, you’d be hard-pressed to make the case. Remember when Magic Johnson called LeBron out for not getting enough TV exposure? Instead of signing a bunch of endorsement deals, LeBron selflessly devoted his energy to getting more involved with the Association, calling attention to the sorry state of the NBPA by flirting with a run for union president.

And what about Miami’s offseason? After giving Mike Miller a classy send-off, in which Pat Riley called him “one of the best we have ever had here,” the Heat signed Greg Oden, who could very well end up being the feel-good story of the season. It may have been impossible to imagine a few years ago, but the Miami Heat are now home to far and away the most sympathetic player in the league – you’d have to have a heart of stone (or hail from Portland) not to root for Oden.

Recent PR boosts aside, even Miami’s past offenses seem tame in hindsight. Everyone booed and hissed when Ray Allen bolted the Boston Celtics for a title shot with their rivals to the south, but with Paul Pierce, Kevin Garnett and Doc Rivers having done the exact same thing in recent months, Shuttlesworth looks more like a trendsetter than a backstabber. As for the oft-maligned Erik Spoelstra, who many saw as a Riley-puppet that couldn’t out Coach Craig T. Nelson, boy did he prove everyone wrong. After recalibrating the offense following their 2011 NBA Finals loss, the Heat haven’t looked back, flat out dominating opponents on a nightly basis and nearly topping the Lakers’ all-time mark of 33 straight victories. Thanks to his ability to control his players and draw up impenetrable defensive sets, Spoelstra has shown the critics that think any idiot could coach the Heat to a title that no, you couldn’t.

Finally, any discussion of alleged Heat douchiness has to address the infamous debut of the Big Three. The stage. The smoke. The “not one, not two, not three…” proclamation played over and over again on SportsCenter. And while it may have been obnoxious at the time, here and now, does LeBron’s “not five, not six…” boast really sound that far-fetched? True, their current title streak is far from unexpected, but surely no one could have predicted that along the way, the Heat may just have become the league’s most likable team. I guess winning really does solve everything.