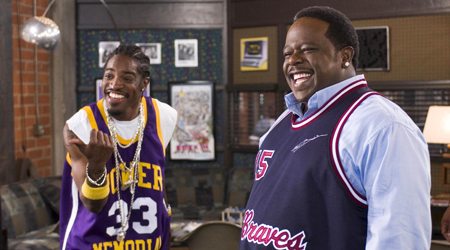 The other day, our friends at ESPN released their preseason NBA rankings, which as you’d expect, were derived from expert analysis and a delicate procedure of hooking Nate Silver’s brain up to a car battery. And while we here at Baller Mind Frame would thoroughly enjoy discussing those rankings with all of you, we think they’re a bit limited in their usefulness – because, really, who could make any kind of meaningful prediction in August?

With that in mind, we have prepared our own, equally arbitrary NBA rankings, selecting the playoff teams from each conference based solely on entertaining, hypothetical season storylines and compelling playoff match-ups.

Presenting Baller Mind Frame’s 2013-14 “that would be cool” rankings:

1. Chicago Bulls
The only way the Bulls are going to finish first is if Derrick Rose regains his MVP form and Chicago picks up right where they left off in 2012. Although unlikely, it could happen, and it would be cool. The Bulls have the benefit of having played together for a number of years, and if Adrian Peterson’s ACL recovery is any indication, the rest of the league could be in serious trouble.

2. Miami Heat
Who wouldn’t want to see Miami fail for a change? Granted, a two-seed is only considered bad on the Ricky Bobby scale, but given their recent history, you can be sure the Heat are operating on an “if you’re not first, you’re last” mentality. Miami could definitely be numero dos if Dwyane Wade goes down, and as much as it would suck to see a great player miss time, wouldn’t it be interesting to see how the Heat would respond? Could they win a title with just LeBron James and Chris Bosh? Could Greg Oden possibly pick up some slack? And what would it mean for the 2014 offseason? Cool storyline, bro.

3. Indiana Pacers
There’s nothing particularly interesting about the Pacers, but you’d have to wonder what it’d do to their collective psyche to finish third in a season where everyone is thinking, “If Indiana is ever going to win, now is the time.” A lack of improvement could also be the product of a poorly-integrated Danny Granger, who, though immensely talented, may not get as much playing time as he’d like. A third seed would also mean a hot and cold performance throughout the season, which could prompt the Pacers to ship off Granger’s expiring contract at the trade deadline for a guaranteed return. We could be looking at a way less boring team come playoff time.

4. Brooklyn Nets
A fourth seed would mean that the Nets improved thanks to their recent acquisitions, but never fired on all cylinders as we all expected/feared. This would likely be the result of Jason Kidd’s failure to bring the team together, which given the inevitable New York media firestorm, would be pretty damn entertaining to watch.

5. New York Knicks
This would be a big drop-off for the Knicks, with added insult to injury thanks to finishing behind their East River rivals. Fortunately for all of us, we’d get to watch what would no doubt be among the best playoff series in recent memory. High stakes for both fans as a new rivalry officially gets underway with a little bit of Knicks-Celtics bad blood sprinkled on top for good measure. Please, God, let this happen.

6. Detroit Pistons
There’s going to be a big fall-off after the fifth seed, and 6-8 seem totally up for grabs. I put the Pistons at six, simply because I’d love to see how they’d match up against the Pacers. They have the size to contest Indiana’s bigs, and the match-up between Paul George and Brandon Jennings would be electric. Plus, it’d be a contest between two totally different styles: No frills, defensive-oriented team ball versus the haphazard “look what I can do” play of almost-superstars, Josh Smith and Brandon Jennings. And who doesn’t want to see Chauncey Billups back in the playoffs with Detroit?

7. Boston Celtics
Everyone is counting the Celtics out, but as long as Rajon Rondo’s on that team, anything is possible. Well, not anything, but with Avery Bradley and Jeff Green also in the fold, Boston could very well surprise some folks. Moreover, at the seven seed, they’d get another crack at Miami, which you know Rondo would love. Blowing a shot at a good draft pick would all be worth it if they could make it a series with the Heat.

8. Washington Wizards
The Cleveland Cavaliers are the trendy pick to make the playoffs, and although they very well could, I don’t find them particularly interesting. Yes, Kyrie Irving is a monster, but John Wall is no slouch either, and if he could actually back up all the talking he’s done this offseason, all the better. I would not mind watching Wall and Derrick Rose go at each other in the first round.

1. Los Angeles Clippers
Given their quick 2013 NBA playoffs exit, it’s hard to believe the Clippers finished only four games out of first last season. With last year’s top three teams expected to fall off a bit, don’t be surprised to see Doc Rivers and the Clips come out on top. Of course, for that to happen, Blake Griffin needs to answer Chris Paul’s not-so-subtle digs and step up. I can’t think of anything more entertaining than Blake “second coming of Kemp” dominating.

2. Golden State Warriors
The Warriors desperately lacked a slasher who could create his own shot last season, and it seems like they found their man. Add his elite defensive skills, and Andre Iguodala could easily be the player that pulls the whole team together. These guys have some of the best fans in the game and it’d be great to see them rewarded.

3. Oklahoma City Thunder
I want to see some drama with this team, damn it! Everything runs too damn smoothly over in OKC, and with Kevin Martin gone, I want to see Kevin Durant and Russell Westbrook try to outdo each other on a nightly basis. While that may not bode well for the Thunder’s title chances, it’d be nice to see some fight out of these guys as they begin a gradual transition from “on the cusp” to “now or never.”

4. San Antonio Spurs
I know, everyone loves the Spurs. And while they probably will finish higher than this, just once I’d like to see them miss a beat. It’s not like they’ll be any less dangerous come playoff time, so relax, imagined critics. Anyway, if they were to finish here, it’s because Manu would really start to slip and Duncan would start to show his age. How would the soft-spoken Kawhi Leonard respond to the added responsibility? I hope it happens, because it would be cool.

5. Memphis Grizzlies
Again, another team that probably won’t finish this low, but don’t they deserve another shot at San Antonio? It really seems like John Hollinger knows what he’s doing, so I can only imagine that Mike Miller, and to a lesser extent, Fab Melo are going to help. And what about the ever improving Ed Davis, who was acquired from the Raptors in the Rudy Gay deal? You’d have to think these guys would have some impact in a Spurs-Grizz rematch.

6. Houston Rockets
This one is actually rooted in truth. I really don’t see the Rockets being as good as everyone thinks they’ll be. What’s more, asthe sixth seed, we’d see them square off against OKC, where they’d have a reasonable shot of pulling off an upset. The rematch storyline, the Harden-OKC storyline…this one would be good.

7. Denver Nuggets
I find this team extremely boring, but seeing as how they gave the long overlooked Brian Shaw a chance at coaching, I can’t take them out of the rankings. Iguodala back in Denver for the playoffs would definitely get some attention, and I’d be curious to see how he responds to the merciless booing he’s sure to receive. And by the way, who’s going to step up in Andre’s place? For entertainment’s sake, let’s hope it’s Nate Robinson.

8. Los Angeles Lakers
ESPN put them at 12, but damn it, I want to see Kobe Bryant get another shot at a ring. And what better way to start than by going up against the top seeded Los Angeles Clippers? If Kobe dunked over Blake, I would feel warm inside. This would be one of the rare series where there is not only matchup intrigue, but a legitimate chance at an upset.

Agree? Disagree? Pissed your team isn’t on here? Let’s see your own rankings in the comments.