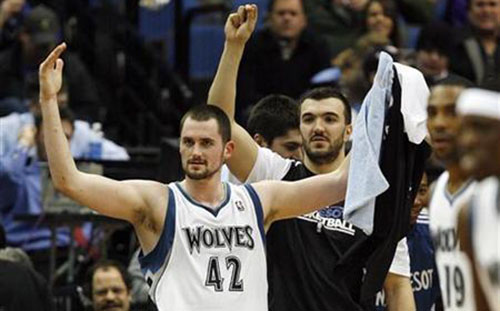 With the ink still wet on Nikola Pekovic’s new five-year $60 million deal with the Minnesota Timberwolves, now is the perfect time to analyze the symbiotic relationship that he and Kevin Love have. Having two quality big men—one a legitimate center—capable of making an All-Star team as the league trends towards small ball is a rarity. The Indiana Pacers have it with Roy Hibbert and David West, the Memphis Grizzlies have it with Marc Gasol and Zach Randolph.

The Los Angeles Lakers could have had it last year. The Atlanta Hawks were close, too, but I consider Al Horford a very talented power forward who played out of position next to Josh Smith. The Detroit Pistons may one day have it. The New York Knicks have it, but only when Carmelo Anthony is playing power forward. The list of “close, but no cigar” goes on.

That isn’t the point of this post. The point is to try and examine how and why Kevin Love and Nikola Pekovic work so well together. The simple answer is that each does what the other won’t or can’t. The tandem gobbles up rebounds faster and more effectively than Pac-Man does dots, but they do so without interfering with one another. Nikola excels on the offensive glass while Kevin dominates the defensive side of things. Why? Because Love, the three-point shootout winner during the 2012 All-Star weekend, is the definition of a stretch 4, and Pekovic is one of the last remaining bruising, back-to-the-basket centers. Don’t take my word for it … I asked Pek this very question on Friday. Here is what he had to say:

On offense, Love will sneak out to the perimeter to shoot threes and long twos. His trailing and usually ill-equipped defender will offer him a decent look at a shot and one less body for Pek deal with. Even when Love is simply cutting without the ball, his accuracy commands a trailing defender. The mountain of muscle that is Pek is free to grab the rebound or tip it back to a teammate, often making the opposition look like children in their own attempts to secure the ball.

On defense, Pek secures the middle. He knocks his man out of position often enough that someone else’s man ends up taking the shot and, while he needs to work on timing his jump, there are few in the league willing to go near enough to the behemoth on a drive to give him the opportunity to get a block. That is exactly the type of player that needs to play next to Love. Love has a strength and a weakness that are rolled into one, and it’s often debated among the Timberwolves faithful. He is a great judge of angles and tenacious in his attempts to get the ball, but it is to the point that from time to time he leaves his man early to get the right position. In the instances where he is unable to secure the ball, Pek is left to deal with two big men in the paint.

The Timberwolves now have a formidable duo for at least the next two years and will no doubt be a force to be reckoned with for the foreseeable future. If Ricky Rubio can find his shot, the team’s wings are able to knock down their open shots and everyone plays team defense, the Timberwolves could find themselves in the upper echelon of the Western Conference standings and maybe even some deep runs at a championship.