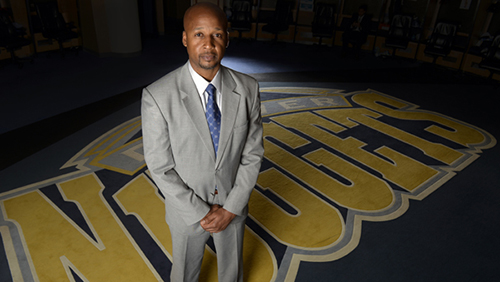 The Denver Nuggets made a bold move this offseason, firing 2013 NBA Coach of the Year George Karl. With the third youngest roster in the league, Karl coached the 2012-13 Nuggets to a 57-win season, a second place finish in the Northwest Division and a three-seed in the Western Conference playoffs. Despite Karl’s regular season success, the Nuggets were eliminated in the first round of the playoffs by the Golden State Warriors. Karl was the head coach in Denver for nine season seasons, and in eight of those the Nuggets were eliminated in the first round.

Among the top coaching candidates this offseason was former Los Angeles Lakers and Indiana Pacers assistant Brian Shaw, who has been a head coaching candidate for the past two years. Many thought the former teammate of Kobe Bryant was first in line for the Lakers vacancy in 2011 before Mike Brown was hired instead. In 2012, the Charlotte Bobcats offered their vacant head coach position to Shaw, but he turned it down in search of the opportunity to coach a more talented team. The Nuggets were able to convince him to become their head coach by selling him on their talented roster and letting him know that he was the guy they believed could take them to the next level.

Shaw will have instant credibility with the Nuggets players because of his reputation around the league and his impressive résumé as a player and assistant coach. He played 14 seasons in the NBA from 1988 to 2003, including stints with the Boston Celtics, Miami Heat, Orlando Magic, Golden State Warriors, Philadelphia 76ers, Portland Trail Blazers and the Lakers—where he played for each year of the “three-peat” championship runs.

He has coached in the NBA for eight years as an assistant with the Lakers and Pacers. From 2005 to 2011, Shaw was an assistant in Los Angeles, under Rudy Tomjanovich for one season followed by five under Phil Jackson, who returned for his second stint as Lakers head coach. During his six years as an assistant coach with the Lakers they made the playoffs four times, including NBA championships in 2009 and 2010. After leaving the Lakers in 2011, he went on to become an assistant coach with the Indiana Pacers under Frank Vogel, and was promoted to associate head coach the following year. With him in that role, the Pacers came close a trip to the NBA Finals, losing to the Miami Heat in a tough seven-game Eastern Conference Finals.

The Nuggets roster is loaded with talent, led by the young core of Ty Lawson, Kenneth Faried, Danilo Gallinari, Evan Fournier and JaVale McGee, and complemented with veterans Wilson Chandler and Andre Miller. In 2012-13, this group helped the Nuggets lead the NBA in offense, scoring 106.1 points per game. In free agency they added veterans J.J. Hickson, Randy Foye and Nate Robinson, and swapped Kosta Koufos for Darrell Arthur and 55th overall pick Joffrey Lauvergne from France in a draft-day trade.

Despite the Nuggets’ success last season and talented roster, Brian Shaw will have his work cut out for him to take this team from playoff contender to championship contender. Shaw will likely install the triangle offense that he played with the Lakers and used most of his coaching career. His challenge will be to find lineups to run it effectively. Andre Miller, Randy Foye, Danilo Gallinari and Wilson Chandler are good fits on the wing for the triangle—good shooters that are able to play off the ball.

Point guards Ty Lawson and Nate Robinson could be great fits because they both can score from the perimeter, but throughout their careers they have been most effective with the ball in their hands—Shaw will need to coax them to be more effective without it. Nuggets big men McGee, Faried, Hickson and Arthur aren’t great passers, and as exemplified by Pau Gasol with the Lakers, bigs who can move the ball are crucial to the success of the triangle.

The Nuggets were horrible on defense last year, ranking 24th out of 30 NBA teams in points allowed per game, allowing 101.1. The loss of Andre Iguodala in free agency to Western Conference rivals the Golden State Warriors leaves Shaw and the Nuggets without their best on-ball defender from last season. The first-time head coach may be forced to play more zone defense to cover up some of the Nuggets’ defensive limitations, and effort and hustle on that end should will likely be prioritized by Shaw.

Perhaps the most talented and enigmatic player on the Nuggets roster is Javale McGee. In the summer of 2012, the Nuggets signed him to a four-year, $44 million contract. Last season he failed to live up to that price tag, averaging 9.1 points, 4.8 rebounds and 2 blocks in 18 minutes per game. Throughout his NBA career he has displayed the ability to be a great rebounder, shot-blocker and finisher, but he has been inconsistent and immature. If Shaw can motivate McGee to play smart, hard-nosed basketball, the Nuggets will benefit on both ends of the floor. With the arrivals of J.J. Hickson and Darrell Arthur, McGee will have legitimate competition for playing time. If Shaw is unsuccessful in motivating McGee, look for the Nuggets to try and move him as they did Nene Hilario in 2011-12.

The Nuggets will have plenty of competition in the Western Conference next season. The San Antonio Spurs, Golden State Warriors, Los Angeles Clippers, Oklahoma City Thunder, Houston Rockets and Memphis Grizzles stand in the Nuggets’ way to a Western Conference championship. Brian Shaw has the pedigree, experience and work ethic to turn the Nuggets into a championship contender. Although Shaw will face challenges, he inherits a team coming off a 57-win season with a lot of talent. With a front office and a fan base that is tired of getting booted in the first round of the playoffs, the Nuggets will enter the 2013-14 season with high expectations. The issue going into the Brian Shaw Era will not be whether Shaw and the Nuggets can meet expectations, but when they will meet them. The front office and fans are waiting for an answer.