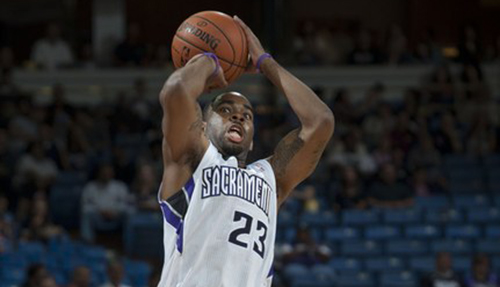 The Sacramento Kings backcourt is in a state of flux. With the offseason acquisitions of a number of guards and the departure of centerpiece Tyreke Evans, the streaky Marcus Thornton has an opportunity to provide stability.

Since his arrival in Sacramento, Thornton has brought firepower to the Kings, but was mostly relegated to do so from the bench. Now, with playing time up for grabs and rotations yet to be determined, an outright starting spot is a possibility for Thornton for the first time.

The Kings spent a high draft pick on Ben McLemore, and there’s typically an assumption that such a player will immediately garner big minutes on a bad team. But that may not be the case in Sacramento. In Summer League, the rookie guard’s handle and shot selection proved unreliable, suggesting that the Kings may have to practice patience rather than thrust him immediately into a starting role.

Head coach Michael Malone’s staff has set out to establish their own system and style of play in Sacramento, and that’s more likely to be achieved with a healthy balance between youthful potential and veteran leadership. In past interviews, Malone has said that the bench is one of a coach’s best teaching tools—expect those rookies who make mistakes to do plenty of learning.

If McLemore is unable to adjust quickly, the Kings will be well equipped to overcome the delay.

While Thornton clocked the lowest minute total of his career in 72 games last season—less than the lockout-shortened 2011-12 season in which he played only 51 games—he was as efficient as ever. Despite the decline in his minutes, Thornton actually managed to shoot and make more three-pointers while improving his percentage from distance.

The positive trend is encouraging and Thornton’s ability to spread the floor will prove valuable in Sacramento’s offense. Consistent perimeter shooting could pay big dividends if DeMarcus Cousins and Jason Thompson establish themselves in the post, allowing them to play off each other. A skilled spot-up shooter also complements point guard Greivis Vasquez, who had a sky-high assist rate last season when he had, among others, Ryan Anderson to dish to along the perimeter.

There’s clearly offensive upside to giving Thornton more minutes this season, but he’s not a great defender, which presents potential problems. Pairing him with either of the Kings’ prospective starting point guards could prove troublesome: Vasquez is a big point guard but doesn’t have the foot speed to stay in front of the tougher covers at either guard spot, and a combination of Isaiah Thomas and Thornton would give up size to just about any backcourt in the league.

Malone, though, brings his prowess as a defensive mind—the same one that turned Stephen Curry and the Golden State Warriors into respectable defenders—to the Kings. Perhaps he’ll be able to reshape Sacramento’s team defense and make otherwise inept defenders adequate.

Off the bench last season, Thornton’s shooting provided a spark and resulted in some memorable performances. Entering his fifth year in the league, Thornton is now a full-fledged veteran and his experience and skill should be better utilized.

On a team rife with the unripe, one of the few certainties is Thornton and his ability to score.