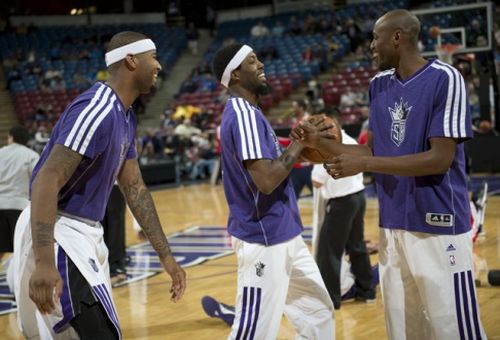 Defense and size, or defense and shooting? This is the dilemma that new Sacramento Kings head coach Michael Malone faces when it comes to his decision regarding the team’s starting small forward spot. While the team has three small forwards on the roster, don’t expect Travis Outlaw to be a part of the competition during training camp considering that he only managed 11.7 minutes per game last season even with a coach like Keith Smart who had a policy of giving players undeserved minutes. The real competition will be between incumbent starter, John Salmons, and the newly acquired Luc Richard Mbah a Moute. While the two are similarly excellent defenders, they have very different skill sets.

Salmons, a long-time King, is a solid defensive player out on the perimeter and can also contribute with the ball in his hands. He is both an adequate penetrator and shooter, skills that could be important given the current structure of the Kings which looks like will be heavily based on working the ball down low to Cousins who will look to kick the ball out on the perimeter.

While his defense, shooting and penetration are each important assets for a small forward, there’s also a down side to his presence in the lineup: Salmons is somewhat undersized for the position. At six-foot-six, he is plenty big to effectively guard opposing shooting guards and diminutive small forwards, but when it comes to the bigger small forwards, which many of the league’s elite are, Salmons is simply overmatched size-wise. The other negative to Salmons’ presence in the lineup is his propensity to shoot the ball. While he is a decent shooter, he tends to be streaky. He will be on fire for a quarter then not make a shot the rest of the game. This could frustrate his coaches to the point that he loses playing time.

Like Salmons, Mbah a Moute provides excellent defense. What he has that Salmons does not is size. At six-foot-eight and 230 pounds, he is on the larger end of the spectrum for small forwards. He can even swing over to the power forward slot at times for small ball. In addition to his advantageous size, Mbah a Moute is also known for being an excellent teammate and locker room presence

However, he has his downsides as well. While he’s an adept defender, he is not a threat on the offensive end of the floor. He shoots most of his shots from within eight feet of the basket and only makes 46 percent of those shots, which is below the league average. He also only shoots three-pointers at a 29 percent clip – not ideal for a small forward. His offense is more or less limited to dunks and put-backs which may cause defenders to move off of him in order to double team another player.

The battle for the starting small forward position will definitely be interesting and I suspect that the decision could come down to the last day of training camp. Will Malone go with the experienced, undersized Salmons or the large-bodied newcomer, Mbah a Moute?

Perhaps Malone doesn’t know yet himself.