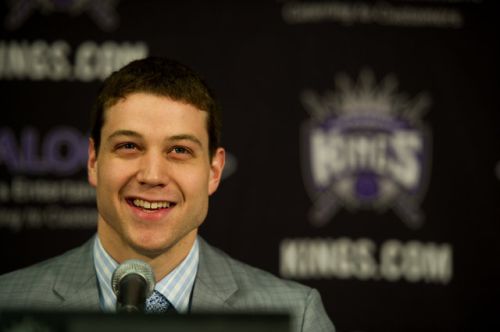 It was an intrasquad scrimmage in the middle of December coming off of the public relations disaster that was the lockout, in a building that would play host to the third-worst attendance in the league, but there were still thousands of fans on-hand – and they collectively screamed, “SHOOT!”

Sacramento Kings rookie Jimmer Fredette had just gotten the ball off an inbounds pass and was about 90 feet from the basket, but that didn’t matter.

Jimmermania was in full effect.

The delay that the lockout caused had only served to further satiate fans’ appetites for a taste of the phenom that set the NCAA ablaze the year prior. Fredette captivated the public in his senior season at Brigham Young, where he made the art of scoring look like finger painting. He epitomized the term “in-the-gym-range,” guiltlessly pulling up to launch, and make, three-pointers from well beyond NBA distance.

That season, Fredette averaged 28.9 points a night on 45.2 percent shooting from the field and 39.6 percent from three, all while taking a ton of shots (20.7 field goals a game and 8.5 threes a game). He was on top of the basketball world.

Somewhere along the line, though, the legend Fredette created in college met the reality he faced in the NBA.

It’s a natural progression, but one that has hit him especially hard. As one advances, from high school to college and college to the pros, talent is funneled and concentrated, separating the strong from the weak. Adapt or die – that could be the Association’s motto for incoming players, and it’s fitting, as the league is ruthlessly Darwinian, leaving the careers of many college legends lying unfulfilled in its wake.

Fredette’s most apparent weakness is his size. At 6-foot-2 and under 200 pounds, he’s giving something up to just about every shooting guard in the league. This, along with his subpar athleticism, manifests itself in other areas of Fredette’s game. At such a disadvantage, he’s unable to guard most opposing shooting guards. Perhaps he’d do better against point guards, though most are quicker than he is.

He’s clearly underwhelming defensively, but he’s had trouble establishing much else in his first two seasons, which have been notably marked by a lack of playing time.

In his rookie season, Fredette saw a decent, yet sporadic, amount of playing time, logging over 18 minutes per game. But the next year, Fredette experienced a dip in minutes, averaging only 14 per game.

The selection of Fredette in the draft was a strange move at the time and there was speculation that the decision came from over general manager Geoff Petrie’s head. Perhaps the Kings coaching staff didn’t have faith in the pick, which showed in their restriction of Fredette’s playing time. Maybe they’ve been justified in their action, though, and Fredette’s performance behind the scenes is why he hasn’t seen much of the floor.

But to argue that a young player with an exceptional offensive talent – particularly one such as perimeter shooting, when the shot’s importance is at an all-time high – didn’t merit playing time on a perennial lottery team seems rather short sighted. Sure, he’s not a good defender, but the Kings still finished 29th in the league in defense the last two seasons without playing Fredette consistent or significant minutes. What did they have to lose?

Either way, Fredette still can make it in the NBA. No, it’s clear he’ll never have the mammoth impact he had at BYU, but there’s a place for him.

Maybe it’s not the amount of minutes used on Fredette – though consistency would be a plus – so much as the way he’s used in those minutes.

He was more efficient in his second season (he improved his shooting percentages across the board), which perhaps can be attributed to the decrease in minutes and, consequently, shots. Those first two seasons, though, Fredette was out of place as a point guard. His best chance at regaining any semblance of past glory is off the ball, at shooting guard.

His flaws aside, Fredette is inarguably excellent at shooting, something that any coach worth his weight in salt could utilize. Rather than allowing Fredette to dominate the ball in a league that he’s incapable of doing so, playing him off the ball at shooting guard, even for measured bursts, has the potential for potency. As a point guard, Fredette has more pressure and responsibility – he needs to handle the ball, initiate the offense and distribute the ball, all before looking for his own shot. Playing him off-ball with the sole task of looking for his shot would allow him to focus on just that, his biggest strength. Surely running Fredette off screens or creating looks for him in the corners would be a better use of his skills than trying to force the fit as a point guard. Isolate his responsibility and specific skill and maximize his effectiveness.

Admittedly, though, the more difficult task for his coach is figuring out how to reap the benefits of his offensive game while neutralizing (as best as possible) his defensive ineptitude. It’s a lot to ask of Michael Malone, of whom defensive expectations may already be too high considering the Kings’ roster (and especially in Fredette’s case; it will take some creativity to hide him or configure the defense to offset his deficiencies), but Malone has overcome similar hurdles in the past.

Fredette’s success is dependent on plenty of factors – being on the right roster, playing under a willing, innovative coach and executing when given opportunity – but finding a place in the league is conceivable.

Despite recent years, Jimmermania hasn’t disappeared; it’s always been there, waiting for a reason to resurface.

Finding a way for Fredette to let the ball fly?