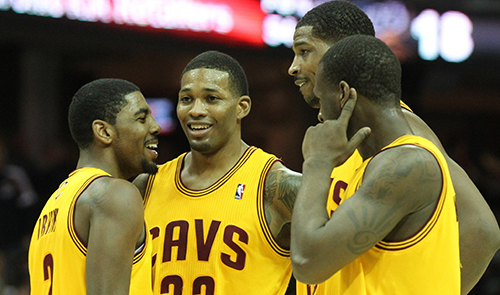 The Cleveland Cavaliers had its most successful seasons during the LeBron James Era from 2003-10. After drafting James with the first overall pick in the 2003 NBA Draft, the Cavs became an instant attraction. Cavs tickets became a hot item in Cleveland and around the NBA, in general. During James’ tenure in Cleveland he led the Cavs to five playoff appearances including an Eastern Conference championship in 2007. He was a six-time NBA All-Star, won the NBA MVP award two times and became the franchise’s all-time leading scorer.

Despite his success in Cleveland, James never won an NBA championship and was often surrounded by mediocre talent. In the summer of 2010 James became a free agent and decided to join the Miami Heat, teaming up with fellow superstars, Dwyane Wade and Chris Bosh. The city of Cleveland was devastated by James’ departure. He was their only hope to bring a championship to a town that hasn’t won a professional sports title since 1964 when the Cleveland Browns won the NFL Championship.

Cavaliers owner, Dan Gilbert, had to devise a plan to recover from losing his franchise player. He promoted Assistant General Manager Chris Grant and gave him instructions to build through the draft. Three years into the rebuilding project, Grant has built a very talented roster, one that is more talented than any team during the LeBron James Era.

The most successful team in Cavs history is the 2007 Eastern Conference champs. Besides James, the roster was filled with two legitimate starters, with the rest being role players. Larry Hughes and Zydrunas Ilgauskas were solid starters, but neither player possessed All-Star level talent. Players that were in the rotation were Drew Gooden, Sasha Pavloic, Donyell Marshall, Anderson Varejao, Damon Jones, Daniel Gibson and Eric Snow. None of these players had the potential or ability to perform like an All-Star.

The most talented team in James’ Cavs tenure was in 2010. They finished the regular season 61-21, but lost to the Boston Celtics in the Eastern Conference semifinal round. Shaquille O’Neal, Antawn Jamison and Maurice Williams were All-Stars during their careers, but they did not play or show the potential to play at that level. The role players were Ilgauskas, J.J. Hickson, Anthony Parker, Delonte West, Anderson Varejao, Daniel Gibson, Jamario Moon and Danny Green. While this team was more talented than the 2007 team, it still lacked the talent to help James succeed in the playoffs.

The 2013-14 Cavs are loaded with young talent led by NBA All-Star point guard Kyrie Irivng. Here are the players the Cavs have selected in the first rounds of their last three drafts:

Irving is a budding superstar, entering his third NBA season, he is regarded as a top 10 point guard in the league. Thompson and Waiters have shown the potential to become All-Star caliber players. Zeller had solid rookie year last season with the ability to be a major contributor for the Cavs. Bennett was regarded as the most talented player in the 2013 NBA Draft and was drafted because he has the potential to be a superstar. Karasev was the best shooter in the draft and could develop into a solid role player.

In free agency, the Cavs signed Jarrett Jack, Earl Clark and Andrew Bynum. Jack received the second most votes for the NBA Sixth Man of the Year award last season, Clark is a solid role player and Bynum, when healthy, is a top-two center. The best returning veterans are C.J. Miles, Anderson Varejao and Alonzo Gee. They will help mentor the younger players and provide quality depth to the roster.

The LeBron James-led Cavs were built with one superstar, role players and players passed their prime, and the talent level of those rosters were not impressive. Former Cavs GM, Danny Ferry did a poor job drafting talent and signing quality free agents. This ultimately led to James’ decision to leave the Cavs for the Miami Heat. Chris Grant has built the post-LeBron Cavs through the draft and with smart free agent signings.

There is no guarantee this version of the Cavs will have similar success to the 2007 and 2010 teams. The Cavs will have to develop their young players and continue to sign quality free agents to fill needs. But, when comparing the talent levels of James’ Cavs teams and the current roster, this year’s team is the winner. Cavs fans will need to be patient as this team continues to grow. It is very possible within the next four seasons that the Cavs will win an NBA title. Maybe free agent-to-be Lebron James decides to sign back with the Cavs and speed up their championship chase. Do not count out a James return to Cleveland; stranger things have happened to their sports teams.