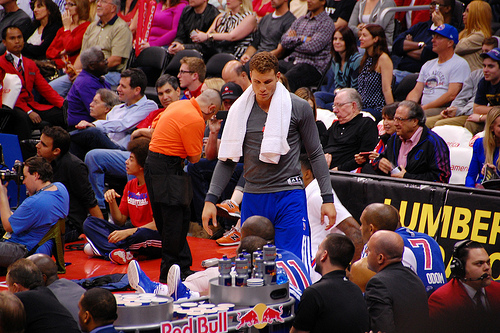 Did the Los Angeles Clippers lose to an emerging Orlando Magic team, or were they beaten? There is a subtle difference that’s currently masked by a young season.

At this point there’s definitely more cause for optimism instead of panic as the Clippers seemingly just had an off shooting night, with first quarter lethargy being the primary method. They fell short of their 124-point season average, scoring 90 on 37 percent shooting, well below the 50 percent marker the Clippers have been closer to in their last three wins.

The Magic were aggressive defensively from the outset, and the Clippers were outscored by nine points in the first quarter and six in the second. They went into the half with zero fast break points and a matching doughnut in field goals in the paint, despite one of the Clippers’ better rebounding performances.

Blake Griffin led the way for the Clippers with 23 points on a night when his perimeter jumper looked its best, however the real stat stuffer was Orlando’s Nikola Vucevic, who collected 30 points and 21 rebounds on 11-for-19 shooting, mostly from the post and perimeter jumpers. Magic rookie Victor Oladipo followed with 11 points, 2 rebounds and 2 assists in impressive athletic fashion.

The Clippers pulled ahead in the third quarter with a 13-1 run that included some dead-eye shooting from J.J. Redick, who led the way with 12 points in the quarter, coupled with tough interior defense from early Defensive Player of the Year candidate DeAndre Jordan, who finished the night with four blocks. They would end the third quarter outscoring the Magic 32-15 to achieve their first lead of the game.

But the Magic refused to lay down. After multiple lead changes, a left-handed jump hook from Magic power forward Andrew Nicholson tied the game at 80 with a little over seven minutes left in the fourth quarter. The Magic would control the tempo for the remainder of the evening.

Small forward Matt Barnes sat out with a thigh contusion and Ryan Hollins, Antawn Jamison and rookie Reggie Bullock were DNPs. The Clippers will continue their three-game road trip on Thursday at Miami.

“If you spot a team 19 points,” Clippers coach Doc Rivers said after the game, “you can win some of those games, but on the average you’re probably going to lose the game.” The Clippers must focus on getting “easy buckets,” as they’ve been more mechanical in the earlier part of the season, seemingly tossing aside the free-flowing style of play that made the franchise popular last season. The theme of overhaul has spread throughout Clipperland, in some areas to its detriment, as there are a few elements instilled in the Clippers repertoire that probably shouldn’t be eradicated, but finely tuned. As the season progresses and Rivers gets more familiar with the areas of comfort for his players, the Clippers will show more consistency on both sides of the ball.

On a lighter note, Jamal Crawford is starting to show greater signs of comfort as his leash has been loosened a bit, and Jared Dudley is starting to find his role in the offense, but has yet to break a double-digit scoring this season. The Clippers will need better production from Byron Mullens as well, who has yet to find his groove. It’s tough to come off the bench and hit contested three-pointers, especially when your job as a stretch power forward demands more physicality than that of a guard. Still, Mullens has struggled to get into a rhythm. It’s still early in the season, and that’s the only rhythm that’s playing.