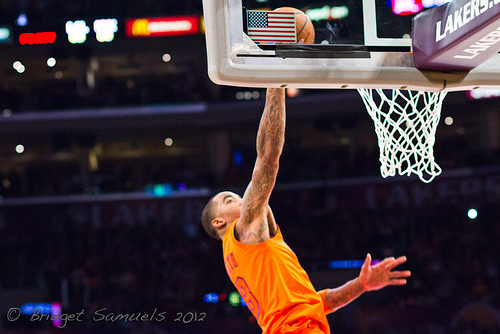 Nobody thinks that New York Knicks guard Chris Smith is good enough to play in the NBA, or the D-League for that matter. Not your average run-of-the- mill Knicks fan, not the anonymous members of the Knicks front office, and not Brandon Jennings.

Reigning Sixth Man of the Year J.R. Smith did not take kindly to Jennings’ tweet about his brother’s NBA credentials and offered to send proverbial goons to Detroit after him.  J.R.’s need to stick up for his brother is understandable but Jennings’ tweets about the younger Smith’s NBA worthiness, while mildly distasteful, were honest. Pooh Jeter, Bobby Brown, and a host of other fringe NBA talents could probably earn that spot on the end of the Knicks bench and contribute more that J.R.’s little brother.

The Smith situation isn’t new, families have always been a fixture in NBA circles. There are a number of brothers, fathers, and sons across NBA rosters and coaching staffs. The Morris twins in Phoenix, the Plumlees, the Zellers, the Lopez twins. You have Doc Rivers and Austin Rivers, and former head coach Mike Dunleavy and Bulls guard Mike Dunleavy Jr. Of course you can’t forget about the backcourt in Oakland, both Klay Thompson and Stephen Curry are the sons of NBA players, and Kobe Bean Bryant is the son of Joe “Jellybean” Bryant.

What makes Chris Smith’s situation markedly different from these situations and many others going back years in the NBA (word to Harvey and Horace Grant) is that Chris Smith has not made it into the league through his own merit. His inclusion on the Knicks roster is basically perceived as a power move through the association. It’s easy to revile Smith for this, but brothers and sons of NBA players who haven’t necessarily earned spot on an NBA roster have consistently gotten shots at the big time.

If we go way back in time to the distant 2012-13 NBA season, the Indiana Pacers dealt with a similar situation that received far less fanfare.  Tyler Hansbrough’s little brother and former Big East Player of the Year Ben Hansbrough managed to carve out a roster spot on the Pacers’ much-maligned bench. Psycho T’s sibling only managed a paltry stat line of 2.0 ppg, 0.8 apg, and 0.6 rpg while playing 7 minutes a game for 28 contests. The only significant occurrence from Ben’s time with the Pacers was receiving an elbow from Tristan Thompson that riled up Tyler’s fraternal fighting instinct.

There wasn’t much uproar about the heartwarming tale of the Hansbroughs last season. At the beginning of the this season, NBA fans were hoping that Seth Curry could join his brother Steph in the Bay Area as the newest biological member of the splash brothers before he was tragically sent down to the Santa Cruz Warriors. There was also the romantic time in 2010 when Coby Karl earned a 10-day contract with the Nuggets. After bouncing around the league, Coby was able to get one more shot under the wings of his father George in Denver.

Instances of nepotism are typically regarded as feel-good stories. Athletic families succeeding at the highest level is somehow heartwarming, even if one family member has apparently gotten the bulk of the talent. So the issue with the Smith brothers ultimately lies with the perception of J.R. and the New York Knicks. The Knicks are undoubtedly off to a rough start and this sibling situation is just a microcosm of the mismanagement in New York. After his Sixth Man of the Year season, Smith is apparently reverting back to his position as the team’s resident headcase and this purported power move to get Chris on the roster is another issue the struggling Knicks don’t need. Despite J.R.’s antics and the financial implications of having Chris on the roster, his signing shouldn’t be thought of as such a terrible thing. Ben Hansbrough, Coby Karl, Seth Curry, Taylor Griffin, and a host of others that aren’t immediate NBA relatives were allowed to enjoy their moment in the sun without claims of being the worst player in D-League history. The younger Smith has finally achieved his dream of making it to the NBA (or at least the Erie Bayhawks) and the hyperbole surrounding his situation speaks more to deficiencies in the Knicks front office than his basketball talent.