How do you look at DRose being helped off the court like that in Portland and not fret like hell?

This is how I found out. A tweet. I was still attempting to get over Marc Gasol’s mysterious non-contact knee injury (later diagnosed as a grade 2 MCL sprain) when I read what I was hoping was a rhetorical question or a joke for NBA aficionados: “Portland, the land knees traverse to make their last stand”—haha, I get it. I chose not to look it up for a full twenty seconds, and then frantically began searching for video evidence until I came across this:

I can’t say I was shocked. Pundits and fans alike have said that, physically, Derrick Rose looked like his old-self, but I’ve felt skeptical that he would remain healthy. Also, the Bulls held Rose out of multiple practices since the regular season began for injuries to his hamstring and neck. Players are held out of practice all the time for imaginary ailments so that was not an indicator that anything was wrong. I was more alarmed at Rose’s subpar play on the court. I rationalized that his struggles were just a result of shaking off rust, and that some upcoming trade would compliment Rose’s talents on the way to the NBA Finals. Now, who knows? The most recent injury to the former MVP is bringing about a few sobering realities that Bulls’ fans need to face.

First, the macro implications: The Eastern Conference is officially a two-team race between the Indiana Pacers and the Miami Heat. Despite likely scenarios that both teams will improve, the abysmal 3-9 starts for the Brooklyn Nets and New York Knicks have proven neither club is a legitimate threat for the NBA title. Another major injury could occur (which the Heat are actively trying to avoid by sitting Wade out of multiple early games) but here’s something we already know: Chicago is not getting a new championship banner without Rose in the lineup. The rest of the Bulls’ roster is not talented enough to beat the Pacers or Heat in a seven-game series. This begs the question, how smart is it to build around an injury-prone superstar, and what’s the tipping point for blowing it up?

The individual numbers for Rose during this comeback are not good. Here are two sets of Rose’s numbers on a per-game bases for different seasons. Can you guess which one is from this season?

If you guessed Season B, you would be incorrect. Season B is Rose’s rookie year where he performed better as a passer and finisher at the rim. This year, he is aggressive but ineffective. Head coach Tom Thibodeau decided to allow Rose’s green light outside of offensive schemes so that he could get his rhythm back but it didn’t help. The team’s statistical efficiency on offense per 100 possessions changed from 24th best in the league without Rose last year to 25th best so far this year. During the 2010-2011 regular season, Rose won the MVP as the Bulls ranked 12 in offensive efficiency. His ability to force defenses into difficult decisions is what makes or breaks the Bulls’ offense. The team is below average without that elite skill at its’ disposal. 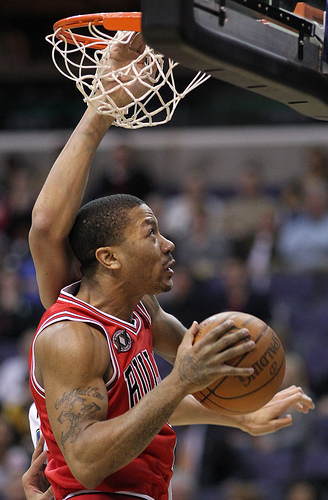 Image courtesy Keith Allison/Flickr – Rose’s body will continue to betray him until he adjusts the force and contortion he exerts on his lower body.

Rose was diagnosed with a torn meniscus in his right knee, the knee opposite of his repaired ACL, which will require surgery to heal properly. What’s unclear is how long Rose will be out: 2 months? 5 months? Through the regular season and the … playoffs? It is a possibility. That fact alone should concern Bulls’ fans, but not upset them too much. Initially, media sources speculated that it was a torn ACL on the right knee. There’s a good chance that Rose can become one hundred percent healthy this season and make a star’s contribution during the playoffs. Anything is possible at this point. I’m going to focus on the positive stuff for now. There’s are enough negative what-if columns centered around Rose’s career being over.

To my Chicago fans, call a fellow Bull and let them know it will be alright. Take momentary solace by witnessing in the abominations taking place in Cleveland and Detroit. We will be alright.