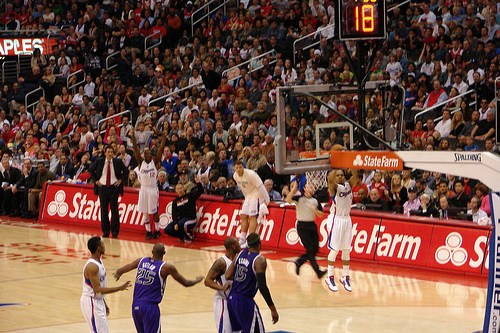 They say home is where the heart is and the Clippers definitely showed theirs over the weekend with a two-game home stand that started with the Sacramento Kings and ended with the deflated Chicago Bulls.

It should’ve just been a two-day scrimmage for the Clippers, who were almost beat by themselves Saturday afternoon and seemed as if they were only playing themselves Sunday afternoon. The Kings came into Staples Center with high energy and positive momentum fresh from two previous wins, although winless on the year against teams above the .500 marker. Chris Paul was one assist away from continuing his record streak of 13 straight points-assists double-doubles, finishing with 22 points and 9 assists in a close battle with Kings backup point guard Isaiah Thomas (22 points and 5 assists).

The Clippers, who are 6-0 at home against the Kings since Blake Griffin entered the league, shot 48 percent from the field and 44 percent from three, producing an early 29-13 lead with all five starters scoring in double figures. Clippers center DeAndre Jordan finished with a big game of 17 points and 12 rebounds, and a rough night from the field saw Blake Griffin post only one field goal in the first half for the second time in his career, before finishing with 16 points and 10 rebounds. Due to turnovers and a sad 26-of-45 from the free-throw line, the Kings came back with hot shooting from rookie Ben McLemore, a tough showing from DeMarcus Cousins, and an aggressive Isaiah Thomas. It wasn’t enough, however, as Cousins took a poor last-minute shot that allowed the Clippers to escape by a final tally of 102 to 103.

Twenty-four hours later, the Clippers took on the Chicago Bulls, who were seemingly deflated from losing their All-Star point guard Derrick Rose for the second time in just over two seasons. Rose suffered a torn meniscus in the opposite knee that was recently repaired from injury and will miss the remainder of the season. Jared Dudley had his best showing as a Clipper, leading the team with 21 points on 12-of-15 shooting. While every Clipper in uniform scored, Dudley was the only player to break 20 points or more. Thanks in part to improved free-throw shooting (89.5 percent), the Clippers’ biggest lead of the game stood at 42 points. Veteran forward Antawn Jamison saw his first minutes of the season and answered the call accordingly, with 11 points in 16 minutes. Doc Rivers seems to be sparing the veteran for more crucial parts of the season. The Bulls just didn’t have it, shooting 39.5 percent from the field, 33 percent from three and 61 from the free-throw line. Luol Deng had a game-high 22 points, but the Bulls still allowed the Clippers to post their highest margin of the season, winning 121-82.

The Clippers have a few days off until Wednesday when they face the struggling New York Knicks, who currently sit in 13th place with a 3-9 record.