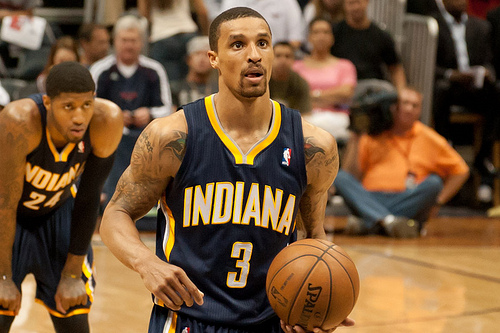 The Indiana Pacers dispatched the Minnesota Timberwolves at Bankers Life Field House tonight 98-84 with a very impressive team effort. It was perhaps the best overall show of united effort the blue and gold have displayed thus far this season. The defense and offense complimented one another quite well as they dominated the Timberwolves nearly from the start of the game, even weathering the inevitable “run” that most teams have once or twice during a contest.

The Pacers led by just two points at the half, but made the adjustments at the break as they seem to be able to do night after night. They had a 13-point lead in the second quarter and looked as if they would run away with the game then, but Minnesota managed to reel them back in thanks to some impressive play by both Kevin Love and Ricky Rubio.

Still, most of the second quarter for Indiana was spent battling the refs with several questionable calls that went against the home team. Channeling that negative energy seemed to take awhile to get focused in the right direction. They didn’t seem to be able to shake those calls until after halftime, picking up several technicals and losing focus on their bread and butter: defense, defense, defense.

Ultimately, with both George Hill and Paul George scoring 26 points each and shooting 7-for-8 from the three-point line, the Pacers were just too strong for the Timberwolves down the stretch. They shot 50 percent from the field overall and held Minnesota to 84 points. The Timberwolves average well over 105 points a game, so to hold a team of this caliber to about 21 points below their average shows how dominate the blue and gold are defensively.

The club still struggled with their turnovers and at times their shot selection was a little suspect – particularly when “bad” Lance Stephenson showed up in the second quarter for a few minutes. These things will still need to be addressed. It seems picky with the record they have and the way they are playing, but to be the best they must play flawless ball, particularly with what is seen coming on the horizon.

The team is now 13-1, with a 5.5 game lead in the Central Division. That number is made much more interesting with the news that the Chicago Bulls’ Derrick Rose will miss the rest of the season with a torn meniscus. The Bulls were their main competition for the division title and there is potential that Indiana can run and hide with a huge lead, if they aren’t demoralized by the scheduling hurricane coming in early December.

The defensive intensity needs to continue against the Charlotte Bobcats when they visit the club on the road on Wednesday night. The big three of Kemba Walker, Al Jefferson and Josh McRoberts can pose match-up problems for the Pacers and they will really need to bring their muscle to this Eastern Conference showdown.

These next two games (at Charlotte, hosting the Washington Wizards) are the calm before the perfect storm for Indiana.

Sunday begins the team’s crucible. A west coast road trip from hell followed by the defending world champions at home in Indianapolis: at the Los Angeles Clippers, Portland Trail Blazers, Utah Jazz, San Antonio Spurs and Oklahoma City Thunder. By the time that trip is over and they have played the Miami Heat on December 10th, the Pacers will have played the top four teams in the west and the Heat – over a period of 10 days. It’s the gauntlet that will determine just how good this team is. It’s an impressively difficult and challenging stretch that by a scheduling quirk has the blue and gold playing the top five teams in the league (and the Jazz). Six games, 10 days.