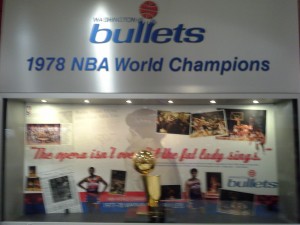 Could another NBA title be in the Washington Wizards’ future?
Image courtesy of Ciaran Finn

In a cold and wet night in our nation’s capital, the Washington Wizards (6-8) managed to top the Los Angeles Lakers (7-8) in a tenacious shootout, 116-111. Going in to the game, the Lakers had taken six of the seven previous meetings between the two teams. The sole victory for the Wiz came in a 103-100 win without sophomore star Bradley Beal.

On Monday evening, Twitter was rife with rumors about Bradley Beal suffering an injury. The Wizards’ worst fear was confirmed when the official website confirmed he had picked up a stress injury to his proximal right fibula. The website explained, “He will miss the next two weeks and then be re-evaluated.” Beal has featured in all games for the Wizards so far this season, averaging 40.2 minutes, 20.6 points, 4.2 rebounds and 3.5 assists. The injury is rather frustrating considering Beal missed the final eight games of last season with a stress fracture in the same leg. After rehabilitation through the summer, it bears questioning whether Beal should have been contributing so many minutes this early in the season.

A piece of consultation news is that the Wizards, however, did welcome back Trevor Ariza to the starting lineup in place of Beal. Ariza had been missing since November 12 with a right hamstring strain. Chris Singleton was also on the bench in a limited role for the first time this season after suffering a fracture in his foot in September.

The Lakers, coming off a three-game win streak, were again without stars Kobe Bryant and Steve Nash and thus would have to rely on their currently highest-scoring bench unit in the NBA and three-point attack. The Lakers have five players shooting above 40 percent from distance.

After a sloppy opening couple of minutes, both sides hit stride and never really looked back. The first quarter saw the Lakers hit six consecutive three-point shots. Nene finished the quarter with 12.

Throughout the half, the Wizards threatened to pull away, being gifted sloppy turnovers by the purple and gold Californians. The Lakers’ accuracy from downtown however was deadly and kept the game within reach. The Lakers finished the game with 13 three-pointers. Jordan Farmer, scoring a team high 22 points, went 3-of-4 from downtown.

The game truly was a game of cat and mouse with both sides giving up the lead frequently. Martell Webster managed to get hot at the right time in the fourth quarter, making three, three-pointers. Webster, starting in place of Beal finished the evening with 20 points.

Nene had a huge game for the Wizards. The 4 seemingly was full of confidence, hitting points both inside and out. The Brazilian finished with a career-high 30 points, also contributing 2 rebounds, 5 assists and 2 steals. After the game, Nene provided the rather fitting metaphor, “I feel like wine; get old, get better.”

John Wall, last week’s Eastern Conference Player of the Week, was again showing glimpses of his standout rookie season. The performance was encapsulated halfway through the second quarter, when Wall chased down court and performed a 360 degree slam. Wall finished with 31 points, 6 rebounds, 9 assists and 3 steals. Delightfully named the “Staples Center East” by Hoop District, the atmosphere must have felt like a road game for the Wizards thanks to the amount of Lakers fans in attendance. Wall punched his chest and signaled to the crowd to make noise. As an amateur lip reader, it also seemed that Wall was yelling the rather David Ortiz-like “This is our city.”

To the NBA purists this game may have had a completely different outcome had Bryant and Nash been on the floor. However, it could be argued that the Wizards were also hurting without Bradley Beal but still managed to pull off a convincing victory. While neither side showed any real defensive tact, the Lakers seemingly lost this game by conceding 28 points through turning the ball over.

The Wizards travelled last night to Milwaukee to take on the 2-11 Bucks this evening. This is followed by a tough trip to the Indiana Pacers before returning back home to the Verizon Center to take on the Atlanta Hawks.