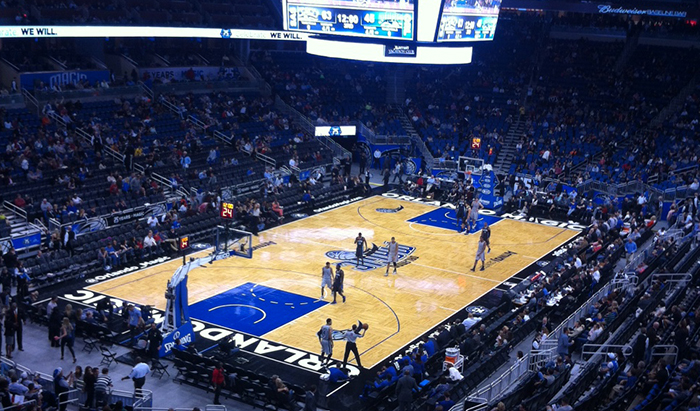 In their first of two meetings this season, the San Antonio Spurs took care of business early and often against the Orlando Magic, winning 109-91. After falling behind six early, the Spurs used a 13-2 run to close out the first quarter of play to take the lead and never look back.

Playing without star point guard Tony Parker was no problem for the Spurs, as five players finished the game in double figures, led by 19 from both Tim Duncan and Marco Belinelli. Belinelli gave the Spurs a lift off the bench, hitting all four of his three-point attempts on the night. Cory Joseph, Manu Ginobli and Kawhi Leonard joined Duncan and Belinelli in double figures, finishing with 13, 11 and 10, respectively.

After a hot start to the game that saw them make eight of 11 field goal attempts, the Magic cooled off considerably, making just two of their final ten in the period. The Magic were without starting point guard Jameer Nelson, who suffered a sprained foot in the team’s win on Wednesday night versus the Philadelphia 76ers.

In his first start as the Magic’s point guard, Victor Oladipo looked poised and confident out there, finishing with 15 points, four rebounds, two assists, three blocks and only two turnovers. Arron Afflalo led the Magic in scoring once again, finishing with 17 points on the night. Nikola Vucevic, Maurice Harkless and Glen Davis also finished in double figures, tallying 12, 11 and 10 points, respectively.

After one of his best games of the season Wednesday night, center Nikola Vucevic struggled to get things going against the veteran Spurs on Friday night. Vucevic finished with 12 points and seven rebounds, but failed to get a rhythm going early, knocking down only four of his 12 shots and turning the ball over a season-high eight times. Vucevic looked visibly frustrated at times, including picking up his second technical foul of the season.

Coach Jacque Vaughn had his big man’s back post-game, saying that it was “one of those 82 (games) and he’ll climb back on the horse and he’ll get after it again.” Vucevic draws another tough center on Monday night when he faces off with former Magic back-up Marcin Gortat.

Making his sixth start of the season, and first without primary point guard Jameer Nelson, Oladipo showed why he was the second overall pick in the draft. Oladipo was strong on both ends of the floor, scoring and getting to the rim at will, slowing down his opponents on the defensive end. While Oladipo has had his share of struggles this season, his last three games are welcoming sights for Oladipo and the fans.

Aside from his eight turnovers on Wednesday night, Oladipo has averaged 17 points, four assists, 3.3 assists, two steals and 1.7 blocks per game. In his post-game interview after Tuesday night’s win in Atlanta, Oladipo admitted the game was “slowing down” for him, which is a welcoming sign for the team, its fans and the league as a whole.

After leading the league for a short time early in the season, the Magic have begun to fall down the table, currently sitting 12th in the league. On Friday night, the Magic saw a big gap in the rebounding battle, being out-rebounded 43-28 on the night. While they were able to keep the Spurs off the offensive glass for the most part, their inability to get their own misses hurt them. The Spurs finished the night +12 on the defensive boards, including a 19-10 advantage in the first half.

After a hot start defensively, the Magic have come crashing back down to earth in a hard way. The Spurs shot 55.3 percent from the field on the night, and enjoyed a 20-point advantage in the painted area. The experienced Spurs bring forth some tough challenges no matter whom they play, but the Magic were unable to take the gut punches on Friday night. The Spurs were able to spread out the Magic defensively, and force over rotations due to their crisp ball-movement. If the Magic want to win at a consistent rate this season, they must be able to play with high energy levels on both ends of the floor.

“I think his approach to the game; he’s the ultimate professional, he’s what a teammate should be, and he’s been a solid force for them for a long time and he continues to be. Even when a play breaks down, he is a comforter, he’s a sleeping pillow for you that you can go to. Never count him out.”

“I think overall for him to get a chance and run the ball club with Jameer not being on the floor is a different perspective for him in as far as initiating the offense and getting guys where they’re supposed to be. That’s an area that he will continue to develop in and tonight was a good challenge for him against a good team.”

The Spurs outscored the Magic 44-24 in the painted area. San Antonio shot a blistering 22-for-35 there for the game. Below is the Spurs shot chart for the night: 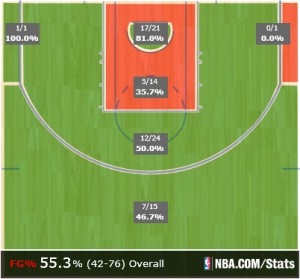