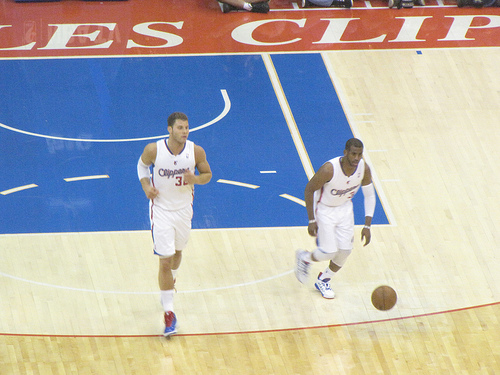 Limited in health and running on empty for heroics, the Los Angeles Clippers hosted Sunday’s mid-day matchup against the “Eastern Conference Hot” Indiana Pacers, who sport the league’s best defense, led by emerging MVP candidate Paul George and Defensive Player of the Year candidate Roy Hibbert. Coming into Sunday’s matchup, the Pacers sported a 15-1 record built on no wins against teams currently over the .500 mark.

The only Clippers player to score 20 points was Jamal Crawford, in a matchup where the Clippers were limited by injuries to J.J. Redick (fractured wrist) and Matt Barnes (retinal tear). Resurrected from the bench, guard Willie Green started in place of Redick, a similar task to the fill-in role he carried in the previous season backing up the oft-injured Chauncey Billups. He’d go on to have the same effect on the floor as he does on the bench.

Chris Paul finished with 17 points and 10 assists, and Blake Griffin posted 16 points and 12 rebounds on 13 field goal attempts. Offensive rebounding was the story of the night, as the Pacers out-rebounded the Clippers 50 to 41, with 17 of the Pacers board coming from the offensive glass.

A seven-point margin separated the teams at the end of the first with the Pacers on top. The Clippers had no response for George, who scored 18 points in the first half primarily from off-the-ball screens while being defended mostly by the significantly slower Jared Dudley, who finished the game with 10 inconsequential points, still visibly bothered by knee pain.

A second quarter surge from the Clippers bench helped to turn the tide a bit, led by aggressive play from Darren Collison and Clippers rookie Reggie Bullock, who showed impressive decision-making off the ball and assertiveness that the starting lineup missed early in the game. He scored 10 points on the night—his first time posting double figures in the scoring column. They received effort and good defensive play from Ryan Hollins, who contributed a timely block that would push the Clippers to their only lead of the night at 41-40 right before going into the half back down 53-47.

The second half opened to a better defensive game for the Clippers starters, and gritty play from Collison and Jamal Crawford, who crossed the nonsense out of Lance Stephenson before coming back from a 14-point deficit to eventually tie the game at 94. The Pacers would ride David West’s 24 points and 12 rebounds and the team’s seven fourth-quarter offensive boards. The Clippers had multiple good looks and Chris Paul missed a couple late from his sweet spot at the elbow to tie the game and push overtime. Indiana would go on to win their 16th game as the Clippers allowed them to grab 50 boards; the Clippers are 0-5 when allowing 47 or more rebounds.

The Clippers will start a seven-game road trip, commencing Wednesday against the Atlanta Hawks without Redick, who will be out for the next six to eight weeks with a fractured hand. Matt Barnes will sit for at least another week due to a retinal tear.