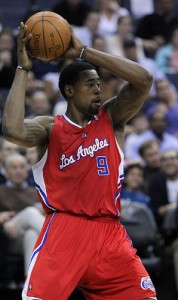 On Monday night the Los Angeles Clippers continued their seven-game road trip against the Philadelphia 76ers, marking their fourth stop on the so-far frustrating road trip. Fresh from their loss against the Cleveland Cavaliers, the Clippers have gone 1-2 on this trip and have been struggling to score the ball, only reaching 101 points once in their last five games. With injuries to J.J. Redick, Matt Barnes, and rookie Reggie Bullock, the Clippers rotation was short against Phoenix, and Doc Riverss patience for another performance like the one given in Cleveland was even shorter.

For a third game in a row, the Clippers prevented an opponent from shooting at least 40 percent from the field, and although the poor Clippers perimeter shooting continued early in the first quarter, Blake Griffin helped moved the club in the right direction, scoring 11 of his game-high 26 points.

Setting the tone early, the Clippers gave a greater defensive effort, ending the night with 10 steals. A 16-0 run between the end of the first half and the opening minutes of the third quarter pushed their lead to 21. Reserve guard Jamal Crawford commented on DeAndre Jordan’s big night: “He’s been a different player from day one. For him, we need him to be our defensive anchor. He’s so important to what we do. He’s been a leader since day one.” Jordan collected 11 points and 21 rebounds in spite of a right foot strain suffered in the previous game against Cleveland.

“We talked about it right before the second half started,” Paul said. “We didn’t want to come out flat. We’ve been doing that a lot this year, especially on the road. So, we tried to come out aggressive and we didn’t want to work our way into it. We wanted to run and pick up the pace and that gave us a little bit of a cushion.” Chris Paul did just that in scoring 25 points and handing out 13 assists in a physical battle against 76ers guard Tony Wroten, who started in place of the injured rookie Michael Carter-Williams.

Evan Turner had a team-high 25 points with 8 rebounds and 5 assists for the 76ers, but it wasn’t enough as the Clippers dug in on defense and shot slightly better in the second half to achieve their third win in a row in Philadelphia, stretching their record to 14-8 and remaining in command of the Pacific Division while sitting in fourth overall in the Western Conference.

The Clippers’ next game is Wednesday against the Boston Celtics. Newly signed swingman Stephen Jackson is expected to join the team, but it’s unknown as to whether he will play.