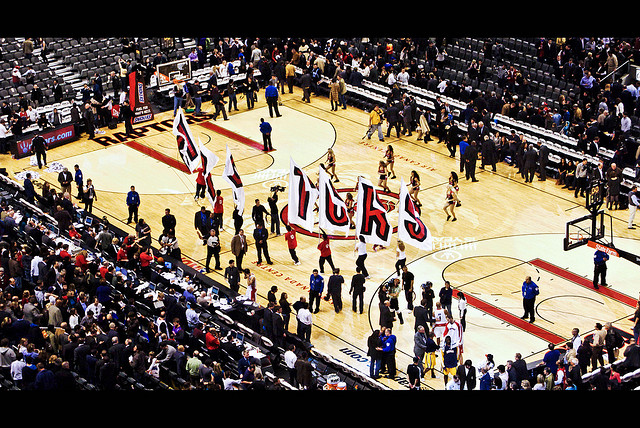 The Toronto Raptors are 10-4 since the trade that sent Rudy Gay to the Sacramento Kings in exchange for Patrick Patterson, Chuck Hayes, Greivis Vazquez and John Salmons. Wins in this stretch include impressive performances against the Indiana Pacers, Oklahoma City Thunder, Dallas Mavericks, Washington Wizards, and recently the Miami Heat. They’ve played the third hardest schedule in the NBA and the hardest to date out of any Eastern Conference team. They’re currently at .500 for the first time since Chris Bosh’s last season in Toronto. No longer are they a team that are led by two selfish gunners, now it’s a free-whirling PnR heavy offense led by the Eastern Conference Coach of the Month in Dwane Casey[1] and point guard Kyle Lowry who’s having his rebirth as an above average lead guard. They have the fifth best NetRtg in the NBA during this stretch. The Raptors defense, which was around league average before the Gay trade, has now blossomed into one of the best defenses in the NBA, and now the loud whispers from TANK NATION has now dissipated quite a bit.

It’s quite a different place the Raptors are in compared to when Rudy Gay was on the roster. The only publicity the Raps got was for the failings and hilarity that ensued with having DeMar DeRozan and Gay take turns turning the Raptors offense into one that resembled Rucker Park. The extent though to how much the Raps offense has improved is a bit exaggerated seeing as they improved from 19th to 14th, but it’s healthier now. Rudy Gay isolations have been traded in for more PnRs with a dynamic PnR player in Amir Johnson and one whose learning on the fly in Jonas Valanciuanas. A big beneficiary for this has been Lowry, who’s since the departure of Rudy Gay has played at an NBA All-Star level, at least in the Eastern Conference:

He’s played the best basketball he’s played since his prime KLOE years in Houston. His NetRtg during this stretch is 22nd in the NBA, his TS% is in the top 50 (37th), and he’s back to doing KLOE things: transition threes with no regard for human life[2], playing the passing lanes like a hawk and being an overall pain in the ass.

It isn’t an outlandish statement to say Rudy Gay’s presence was hamstringing Valanciuanas’ development. Every time a Raptors game was on, I could bank on Jonas having his hands up open after a PnR and seeing his teammates miss him on the roll. This wasn’t all on Rudy, and as Zach Lowe detailed it in the past, these were more mirages than anything. Still though, he’s been much better on both ends since Rudy’s departure. Even though his USG% has been the same, he’s gone from having a Net Rtg of -4.1 to 6.2. He’s become much better on the defensive end and is showing much more flashes of a guy who could anchor your defense at a high level. He’s 23rd in opponents FG% at the rim via Sport VU after being in the mid-50s during earlier parts of the season, and he’s become better at the nuances of the PnR at both ends of the court. His rolls to the rim are timed better, and though the types of picks he’s setting aren’t much different than the ones Zach Lowe described, the execution has improved.

There are still hitches to Valanciunas’ performance; his mid-range game is bad, which might explain the need for him to pump fake the amount he does, and the pump fakes aren’t getting opponents out of their sneakers anytime soon. This is nitpicking a bit though, because the overall package is coming quite nicely.

The same could be said of Terrence Ross, who after months of teasing, has played like a legitimate NBA starter. One of the pieces I wrote for Raptors HQ during my time there was on Ross after his rookie season, and some limitations that lingered from his days at the University of Washington:

Similar to his breakout year in Washington, you won’t be mistaking Terrence Ross for a guy who can create his shot off the dribble. He shot only 31.6 percent from the field in Isolation attempts. What you notice with Ross, when creating off the dribble, was his tendency for pull-up jumpers, a by-product of some sorts from his questionable ball handling. He registered a ranking of 170 with a PPP of 0.68. His passing also needs work, which will hopefully come with more experiences in dealing with today’s complex NBA defenses, and a marked improvement in his ball-handling. Ross only registered an AST% of 6.9% while having a USG% of 19.6% and a TOV% of 9.2%, numbers that aren’t exactly good for the heart. It isn’t necessarily that Ross is a ball hog or has tunnel vision. Ross can and usually does make the correct pass out in situations that call for it.

His game hasn’t changed much at all from last season save for the actual production. His shooting has been ridiculous during a 14-game stretch with a eFG% of 56.0% and near 46 percent from three-point range at 5.8 per game. He’s turned into a legit asset and his shooting has helped spread the Raps’ PnR’s offense even more with his screens along the baseline. His off-the-dribble game is still dormant, though now and then he’ll make forays to the rim that’ll make you raise an eyebrow or two. Defensively is where perhaps Ross has the biggest ceiling for his game. He is a prime athlete, an athletic marvel if you will. He’s more and more had to guard the opponents best wing player with the departure of Rudy Gay and he’s done a commendable job at it[3]. The idea of the 3-D guy has popularized substantially in the last couple of years and if this stretch is a barometer of what’s to come for Terrence Ross, he’s going to be a fun, fun player for years to come.

The Raps have become the best team in the Atlantic Division, though achieving that wasn’t exactly bordering on University calculus difficulty.  Their bench has been really solid and steady with the Four Horseman coming over[4]. Amir Johnson has gone up a level with more PnRs and responsibility offensively coming his way, and though DeRozan’s shooting has been bad lately, he’s doing other things that he previously never did. The Raps have attained a .500 record despite having an extremely difficult schedule, and after their next encounter versus the Indiana Pacers, the next couple of months for them is very manageable to say the least. Tank Nation is dissipating rather quickly and the reality of a top four or even a 3-seed is very much a reality. Now whether or not this is good for the franchise going forward is something that’s still years away from deciding.

[3] The Pacers/Raps matchup from a few days ago would be an example of the potential he has on that end. He did as much as one could do giving Paul George fits on that end, chasing him off screens and helping his big man set up shop in the lane with closeouts and sticking to the system. It was fun as hell and bordered on being Broadway-like theatre.