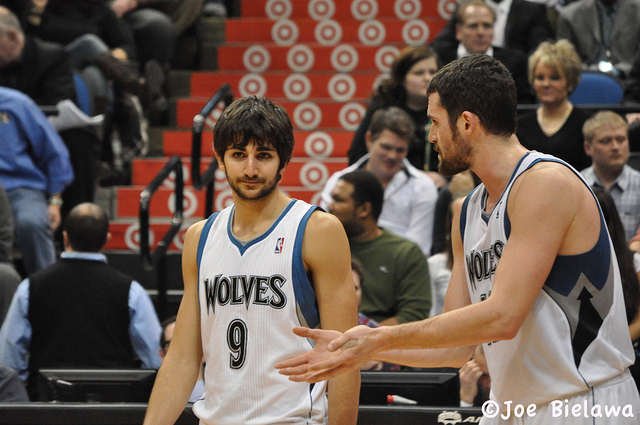 Two weeks ago I wrote my first column for Baller Mind Frame, on the Minnesota Timberwolves and their makeup as a squad. I was rather bullish on their chances to make the playoffs, noting at their strong SRS and how they were too good to have such a crappy crunch time NetRtg:

The Wolves have been an above average team who have been until recently dogged by a hard schedule. They have the tenth best NetRtg in the NBA and their upcoming month should see an uptick in their record. Their crunch time numbers have been abysmal, but considering that they have the best overall NetRtg of anyone with a negative crunch time NetRtg, this should normalize a fair bit. There are issues to be concerned about, and if Budinger can’t make a full recovery from his knee issues, that’s a real blow to their bench who desperately needs his shooting and driving ability.

Since that post, The Wolves have gone 3-4 with more misery in crunch time scenarios. Two of the losses came against the Dallas Mavericks and Phoenix Suns, teams that the Wolves are trying to catch in the standings[1]. The three losses were gut wrenching, the type that make you question whether there truly is a god. They have the worst crunch time NetRtg in the NBA and there are numerous issues that have hampered the Wolves’ ability to jump a level to a sure playoff team in the Western Conference.

The Wolves have the seventh-worst offense in the NBA in these situations, a far cry from having the tenth-best offense overall. Their assist-turnover ratio is actually better in crunch time but the issues with the offense are the same. There’s just not enough shooting on the court, and it makes the defense’s job much easier by just ignoring three non-shooters on the court. There have been numerous discussions on Ricky Rubio’s shooting and just how bad it really is and how much it is derailing the Wolves offense. There’s even writers who are willing to call the drafting of Rubio a mistake. I think we can agree on the fact that whatever opinions you have on Rubio[2], the lack of spacing he brings along with Pekovic and Brewer presents issues for the Wolves. 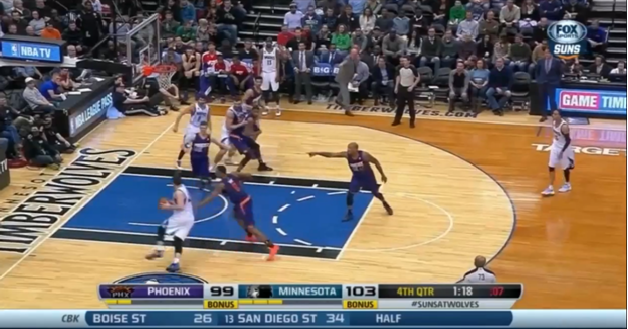 Just look at how cramped the spacing is for Love. It’s Pistons-esque. P.J. Tucker is instructing his teammates to pack the paint. It’s really hard to hide three non-shooters in today’s NBA when teams can play zone and overload their defense in the paint. Something also worth noting with Rubio is his shooting and the distribution of his shots. 36.96 percent of Rubio’s shots are coming from the mid-range area, and in the Oklahoma City loss three possessions in crunch time were Rubio jumpshots off pick-and-rolls, via Synergy Sports: two from mid-range and one from the non-restricted area. He missed all three of them and the Thunder were more than glad to give up those shots: 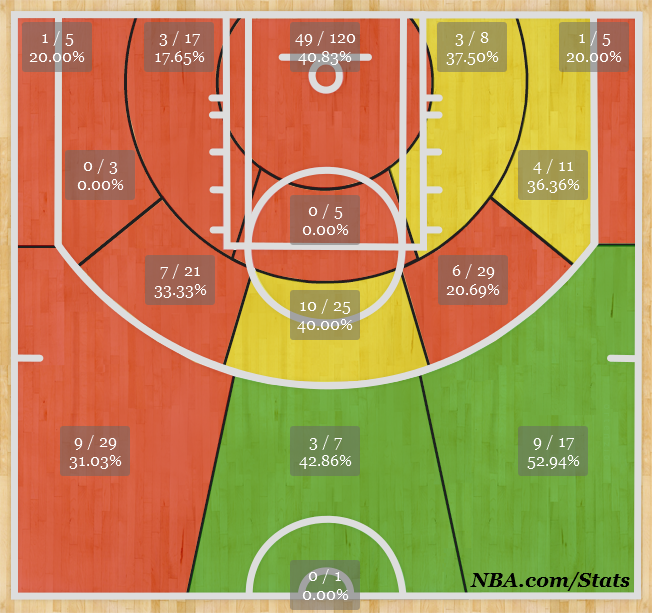 Rubio’s shooting 40 percent from the center 16-24 free-throw area, right around league average. But he’s nearly comatose in “winning time,” going just 2-for-16. Kevin Love is shooting 35.7 percent from the field in these situations. Corey Brewer and Kevin Martin have been above average in their percentages but their opportunities have been few.

The thing with the Wolves is they’re maximizing what they have with their offense. Their sets are creative and they’ll even have high post-ups involving Love turn into threes via the guard bringing up the ball and screening for Love, like Steve Nash did for Amare Stoudemire back in their Phoenix days: 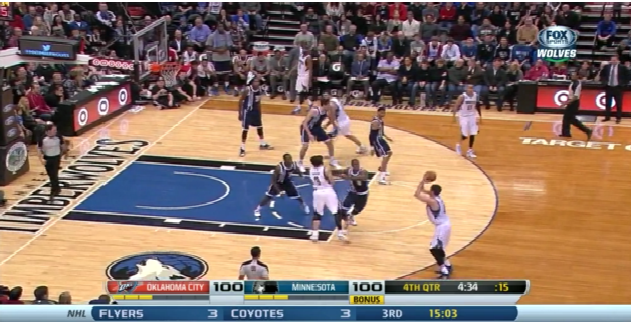 Is it just perhaps that the Wolves’ deficiencies overall are being highlighted in these situations? Is it just bad luck? One of the things that I love about the NHL in recent years is the introduction of the “advance stat” PDO[3]. If the NBA had something similar to this, I would suspect that the Wolves would have some of the worst luck-based stats in the NBA.

This section will be much shorter than the previous one. The Wolves have the worst DefRtg in the NBA and it’s been a common occurrence for the Wolves since Rubio’s rookie year. They’ve been below average since the 2011-12 season in DefRtg, and last season they were  20th in the stat. Nikola Pekovic and Kevin Love are average defenders and teams can exploit them in the pick-and-roll consistently: Plays like this are common whenever Love and Pek are involved. Each like to sag on pick-and-rolls to cover for their deficiencies. Via Synergy Sports, the Wolves overall are 21st in guarding the roll man in the and 17th in guarding the ball handler. The lack of rim protection between the two has been chronicled but the issue in this area is perhaps just as great. The thing with Pekovic is they sometimes have him hedge, and whenever that happens he looks like a man who’s carrying a grand piano on his back. The Mavs exploited this against Minnesota throughout the game, going  7-of-8 in situations that ended with the roll man, courtesy of Synergy Sports.

It’s better in general to trust the larger sample size of what they’ve done overall than to trust crunch time. The Wolves have done fairly well efficiency-wise on both ends this season and they feature a fantastic offensive big man combo, but why is it that the Wolves have struggled so much? Again, is it luck? Is it that Minnesota, who’s second in pace in the NBA, is just too tired at the end of games to execute on both ends? Is it both? I don’t mean to make this become a rhetorical version of 20 Questions but the decline in production in closing situations is startling to say the least. One thing I tried to do is see whether being good in the clutch from the 2004-05 season to the 2012-13 season has a big correlation to a team’s overall winning percentage: 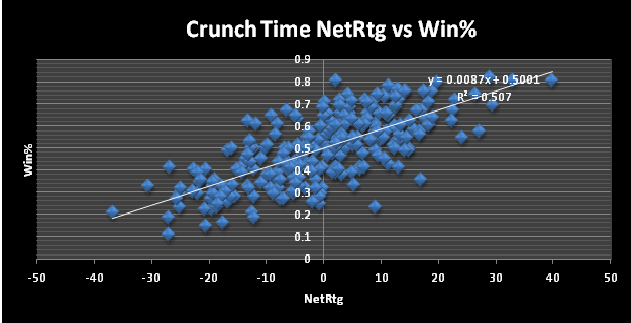 That’s a fairly strong correlation right there, with a breakdown of 71 percent being talent driven and 29 percent variance/regression. What’s different though is how much it’s changed over the years: That’s a nearly an eight percent increase in talent (66.4 percent to 74.3). We’re in a golden age of sustainable talent in the NBA and perhaps that’s contributed to better crunch time stats. Isolation ball has been weeded out a bit more in favor of more creative sets. The 74-26 split from 2008 to 2013 is a solid indication that being good in the clutch tends to effect winning percentages, but perhaps the Wolves can survive that. Remember, the Nets, Celtics, Clippers and Mavericks had negative net ratings but managed to have at least a .500 record overall last year. Will the Wolves be part of the 71 percent or the 29? For the sake of the state of Minnesota, it’d better be the latter.

[1] Though with the recent news of Bledsoe’s knee injury, catching Phoenix is probably doable now unless the Suns have a backup plan

[2] BTW, let’s get this over with. The idea that drafting Ricky Rubio was a mistake is very harsh and narrow minded considering the fact that he tore his ACL in his rookie season. He’s only in his 3rd year in the NBA, his Ast/TO ratio is the best of his career, he does make the Wolves better on offense and he’s a solid defender. He needs to get better as a shooter but let’s calm down on the witch-hunt on the guy. He’s not even 25 yet