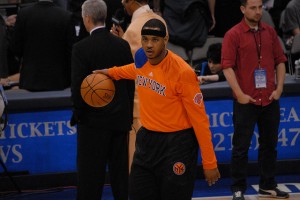 Deron Williams and the Nets’ reserves were toying with the New York Knicks when their fans joined in the fun, belting out a “Brook-lyn!” chant that seemed as loud as when they’re home.

“That was nice,” center Andray Blatche said with a grin.

For the Nets, Monday’s game at Madison Square Garden looked good and sounded even better.

Joe Johnson scored 25 points and the Nets sent the Knicks to a fourth straight loss with a 103-80 victory, evening this season’s New York rivalry at a game apiece.

“Obviously when we first played them, they embarrassed us,” center Kevin Garnett said. “So obviously we needed to come back and get a payback, and kind of redeem ourselves because lately we’ve been playing better basketball and today was a great job of what we’ve been doing lately.” ESPN

The Nets should be given credit for kicking tail, but the Knicks did not help their cause much.

The Knicks had their worst shooting game of the season including a combined 8 out of 34 from Raymond Felton, Pablo Prigioni, Iman Shumpert, and J.R. Smith.

What the #Knicks worst shooting game of the season looks like: pic.twitter.com/9HYwl8WZmn

For a variety of reasons, this team needs roster changes. Let’s see if management actually pulls the trigger. – AL