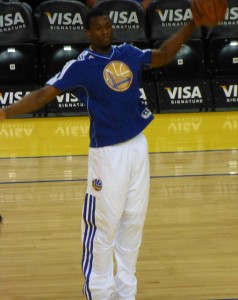 In the 2012 NBA Draft, Golden State Warriors fans everywhere rejoiced when the Cleveland Cavaliers chose Dion Waiters with the fourth pick overall. This development all but guaranteed that Harrison Barnes would be drafted by the Warriors. The ambitious tank job to secure the seventh pick had paid off and it looked like Golden State had landed a guy who would be, at worst, a serviceable NBA talent.

Now Warriors fans may be lamenting Waiters going fourth. Had Barnes been picked there, it’s quite possible that Andre Drummond would have been summoned to the Bay Area. This lament is indicative of Barnes’ underachieving sophomore season, not to mention Andre Drummond looking like a premier center. But let’s focus on Harrison Barnes.

There were a few circumstances that allowed for this development. The obvious one is that David Lee got injured. This forced Barnes to play the 4, something that for some reason only Mark Jackson knows almost never happened during the regular season. Barnes at the 4 caused matchup problems for the Denver Nuggets and San Antonio Spurs. Just look up Barnes’ dunk on Anthony Randolph to see the matchup problems manifest. Also, many of his points against the Spurs came on one-on-one post-ups against Tony Parker.

The other circumstance was that Steph Curry became some sort of basketball-shooting deity. He was shooting out of his mind, even by his standards. I mean, he hit a one-footed runner from behind the three-point line. The result of this was obsessive defense on Curry often leaving Barnes wide open from three. So the lesson is: if you want your strong 6’8” small forward to have success, get him wide open threes, and post-ups against guys six inches shorter than him.

The general public seemed to turn a blind eye to these circumstances. They overlooked the fact that he had an average rookie season and was largely forgettable at times. Everybody figured that Harrison Barnes was going to replicate his playoff success this season. We’re halfway through the season now and there’s been no sign of Barnes’ improvement. He plays slightly more minutes than he did last year and scores one more point per game, but just about every single meaningful advanced metric (PER, eFG%, NetRating, REB%, etc.) is down from last year.

The common explanation for his lack of improvement is the arrival of Andre Iguodala. Andre usurped the starting role from Barnes who is now forced to play heavy minutes with the bench, meaning he has no Steph Curry to create for him. The other issue is that Draymond Green has improved, and at this point is undoubtedly a better player than Barnes. Green’s defense and rebounding is years ahead of Barnes’, and Draymond’s offense is no longer an impediment to his playing time as he can knock down an open three.

Ultimately, it’s Barnes’ fault that he hasn’t improved. He still lacks aggressiveness and when watching the Warriors it is easy to forget that he is on the floor. He goes long stretches in which he contributes nothing to the game. Barnes has to be better in that sense.

But to externalize, I don’t blame the arrival of Iguodala as much as I do Mark Jackson’s shortcomings in managing lineups. Despite the playoff success, Barnes still doesn’t see big minutes at the 4. Jackson also fails to stagger lineups. The Warriors starters play primarily with the starters and the reserves play primarily with the reserves. Mixing this up could be hugely beneficial. For instance, David Lee could be immensely helpful getting minutes with the reserves as that is a group that just can’t score effectively. Meanwhile, this will open up minutes for Green and Barnes at the 4. I’m not suggesting Lee come off the bench, just simply utilizing his 34 minutes per game differently.

The fundamental truth is if Barnes wants to become a good player in this league, it’s on him, but some better lineup management from his coach will certainly augment the process.