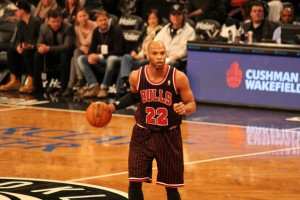 Hinrich and Mike Dunleavy have been churning in the rumor mill for more than a month. Now Taj ­Gibson’s name is picking up steam. What the Bulls do with him could determine how serious they are in clearing salary-cap space for a max contract to land a player such as Carmelo Anthony or LeBron James.

According to a source, the Lakers, Wizards and Bobcats have inquired about Gibson, but they were preliminary talks in which the Bulls didn’t like the return.

Moving Gibson would signify the Bulls’ determination to give ­Derrick Rose a second superstar to play with.

The Bulls probably will use the amnesty clause on Carlos Boozer’s contract this summer. It calls for him to make $16.8 million next season. That makes moving Gibson all but a necessity if the Bulls want to stay under the luxury tax and add a max deal. Taj Gibson will make $8 million next season, $8.5 million in 2015-16 season and $8.95 million in the final year of the contract. Chicago Sun-Times

It is unlikely that any max player will sign with the Bulls because of Rose’s uncertain health the past few seasons. Regardless, I support moving Gibson for future cap flexibility and to allow Jimmy Butler room to expand his role.

Tom Thibodeau is like the NBA head coaching version of Macgyver – he can coach any group of guys above .500 as evidenced by the Bulls 11-4 record in 2014 so far. There’s no telling what will take place once he finally has a healthy roster; however, the Bulls’ front office would be wise to keep Thibodeau happy as they trade away players he likes. It’s a dangerous balancing act. – AL