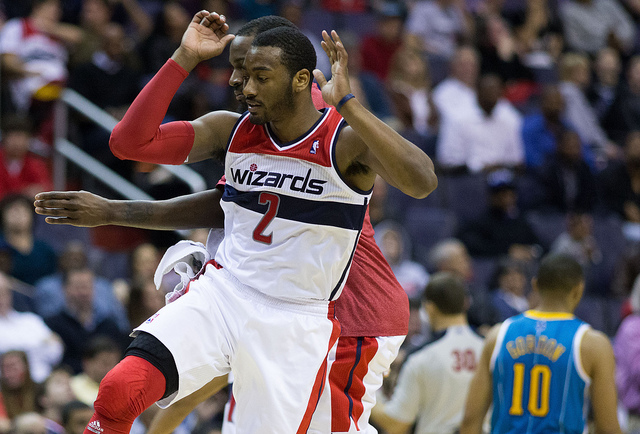 The NBA is stellar – it’s all about the stars. As great as it is seeing them compete at their apex, it can be equally fun to watch players ascend into that upper-echelon. The NBA is constantly changing, with players moving in and out of the league’s elite level as they enter and exit their primes.

Here are 10 players breaking out of their shells and into the hearts of fans across the NBA:

The Toronto Raptors were the butt of plenty of jokes about the Eastern Conference at the beginning of the season, rising to the top of the Atlantic Division with a losing record. Recently, though, they’ve brought defiant legitimacy to their title as division-leaders, and without their supposed best player, Rudy Gay, who was shipped off in December. Much of Toronto’s success can be attributed to Lowry, who has shined since the trade, registering double-digit scoring in all but two games since. Lowry has long been a player with the potential for potency, but in the starting role on a young Raptors team, he’s averaging career-highs in points (16.6) and assists (7.5) and three-point percentage (39.4). He may well play a key role in whether or not the Raptors surprise by getting out of the first round of the playoffs this year. (I can’t believe I just wrote that sentence either.)

Pair freakish athleticism with a huge frame and, at worst, you’ll have yourself a prospect. Since his short time at UConn, where he underwhelmed, Drummond has been pegged with that “potential” label. It’s what simultaneously dropped his draft stock and made him a top-10 pick. This year, he’s finally starting to realize that potential. During the summer, he impressed at Team USA practices and so far this season he’s been a force inside. He’s third in the league in rebounding, pulling down 12.8 boards a game on a team that also sports Greg Monroe and Josh Smith. It’s only Drummond’s second year in the league and he’s already a daunting mismatch for most. He’s even improved his free throw percentage to 41.4 percent from 37.1 percent last season. Now, if that’s not progress I don’t know what is.

For the first two years of his career, Thomas got the runaround. He’d be teased with time as starting point guard of the Sacramento Kings, only be replaced by someone like Aaron Brooks. Thomas always delivered as a starter, which is why watching him come off of the bench was so confounding. But Thomas has finally gotten his shot this season. After being passed over once again – this time in favor of Greivis Vasquez – Thomas regained the starting position and never looked back. Any given night, Thomas is capable of exploding; he’s been the sole reason the Kings have either won or at least not been completely humiliated in a number of games. Averaging 20 points and 6.2 assists per game this season, he’s been one of the best players on a team with talent at the top and he’s proven his place as a starting NBA point guard.

Similar to his teammate on this list, Stephenson really started garnering attention after his performances in the 2013 Playoffs. With those came this season’s higher expectations, which he’s met, playing a key role in the Indiana Pacers’ success. Stephenson’s do-anything play impacts every facet of the game. He plays with ferocious energy and intensity on either end of the floor and looks like a shark the way he attacks in transition, gliding across the floor with a sort of violent grace as he weaves through and blows past defenders en route to the hoop. Stephenson has become the “Born Ready” people envisioned making it in the NBA back in his Gunnin’ for that No. 1 Spot days.

The biggest surprise of the season thus far may be the Phoenix Suns, who have defied their tankeriffic expectations and have thrown their hats into the playoff conversation. Eric Bledsoe headlined the show at the beginning of the year before he and his backcourt partner earned the “Slash Brothers” moniker. Since, though, Bledsoe has gone down with an injury yet the Suns continue to rise, thanks to Dragic. In his second stint in Phoenix, Dragic is averaging 20.1 points and six assists and even made many pundits’ All-Star reserves ballots. He boasts a lethally efficient offensive game in which mid-range jumpers and attacking the basket rule above all else. Dragic has played perhaps the biggest part in the resurgences of PJ Tucker and Gerald Green’s careers – two years ago the former was out of the league and the latter was halfway there. That last sentence may be evidence enough that he’s having a prolific season; he’s helped make Tucker and Green key contributors and starters on a playoff team.

If he had stayed in college, the 20-year-old Davis would be a junior today. Instead he’s in his second year in the NBA and averaging 20.5 points, 10.5 rebounds and a league-leading 3.3 blocks (second, Serge Ibaka, has 2.5 per game). Meditate on that.

Done? OK. In his sophomore (NBA) season, Davis is already putting his stamp on the league. He’s a likely late-addition to this month’s All-Star Game, what would be the first of many for a player that is well on his way to becoming one of the league’s best.

Wall seemed to put any questions about his game to bed at the end of last season, when he returned from injury in stellar fashion, leading the Washington Wizards to respectability on the backs of his outstanding performances. Yet some still questioned the Wizards’ decision to give him a max-contract and he gets overlooked in favor of a diva point guard in Cleveland who doesn’t play defense. The Eastern Conference is admittedly weak, but Wall, who is averaging 20 points, 4.4 rebounds and 8.5 assists, has led the Wizards to a winning record and fifth seed in the conference.

Now we just need to talk to the executives who left Wall out of the Team USA pool. That’s criminal.

Lillard is part point guard and part conductor. The way he deftly directs the Portland Trail Blazers’ top-ranked offense is something to behold. With a flutter of his eyes and a flick of his wrist, Lillard’s pick-and-roll can become the most deadly offensive attack in the game. Along with LaMarcus Aldridge he’s helped vault his team from its modest preseason expectations to becoming contenders in a brutally competitive Western Conference. The second-year point guard’s play has caught the attention of most everyone around the league. Kobe Bryant endorsed Lillard to replace him as a starter in the All-Star Game shortly before the coaches voted him in as a reserve.

The Kings’ new front office and ownership raised some eyebrows when they decided to extend Cousins with a max-contract in September, something they could’ve held off on doing until this July. At the time, many criticized the move as an unnecessary reward of Cousins’ bad behavior. Since then, however, Cousins has proved his worth. He’s become a walking double-double and arguably the best center in the NBA. He does lead the league in technical fouls, and while his behavioral outbursts have been limited, they haven’t been nonexistent. He’s come a long way, but Cousins still has plenty of room to grow both on the court and off of it, a frightening thought for every team in the NBA, including his own.

Sure, George has been riding the hype train for nearly a year now – his real coming out party was the 2013 Playoffs – but this is the longest stretch we’ve seen him play at the elite level he did during the Eastern Conference Finals. In the first four months of the season, George has solidified his leap from good to great. He’s averaging more points per game, shooting higher percentages from the field and beyond the arc, has a higher offensive rating and a lower defensive rating. And, as if to announce his arrival, he threw down the nicest in-game dunk since Vince Carter was younger than 30-years-old.

Nine months ago, there were conversations about whether you would take Carmelo Anthony or Paul George, debates that would elicit laughter now. This season, he received the third-most votes of any All-Star Game starter, even beating out Bryant and his fanatical following. Years from now, the 2013-14 season will stand as the one that ushered George into superstardom.

Correction: The previous version of this article incorrectly stated that John Wall was not named to the 2014 NBA All-Star Game. He was voted in by coaches as one of the game’s Eastern Conference reserves.