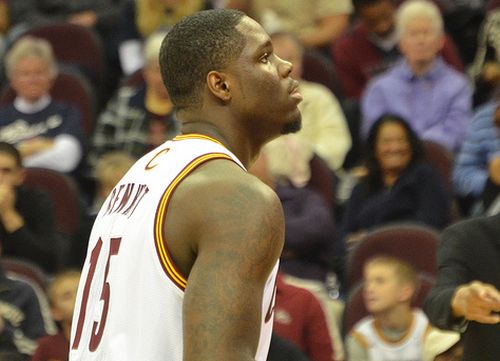 Since his name was called by David Stern at the 2013 NBA Draft, Anthony Bennett’s professional career has gotten off to an auspicious start. He’s been mocked, maligned, benched and booed.

Tuesday, for one night at least, he lived up to his title of No. 1 overall pick.

Bennett led a potent bench attack for the Cleveland Cavaliers, who had 50 bench points and walked away with a 109-99 victory over the Sacramento Kings.

The Kings entered Cleveland Tuesday night in a time of turmoil. The Cavaliers’ general manager Chris Grant was recently fired amidst an abysmal season. Perhaps if Bennett had logged more performances like Tuesday’s, Grant would still be around and Cleveland would be in playoff contention.

The Cavaliers rookie was active from the get-go, attacking the paint, which also led to nine attempts from the free-throw line. The game, in which he registered 19 points and 10 rebounds, ended up being the best of Bennett’s young career.

Sacramento’s defense proved a stark contrast to what it was in the team’s 124-80 rout of Cleveland at home earlier this season. In Quicken Loans Arena, the Kings interior defense was more hospitable than hindrance, allowing 46 points in the paint to the Cavaliers.

Sunday, Malone expressed optimism with his team’s defense, encouraged by its play in the second half against the Washington Wizards. It didn’t carry over, however.

The Kings allowed the Cavaliers, who have shot 42.4 percent on the season, to make 47.7 percent of their field goals Tuesday—largely a product of the porous defense inside.

“You have to make people uncomfortable on defense. You need to get into them, have some physicality,” Malone said. “They got out to a 30-point first quarter and they were doing whatever they wanted. When you let teams get off to a start like that—get comfortable—it’s going to be hard to stop them.”

Despite some occasional peaks in performance, the tune around the Kings has stayed largely the same all year. While defense has always been a priority for Malone, it clearly hasn’t been for his players.

Defeat and poor showings, though, Malone said he can accept. What he finds upsetting and disturbing is Sacramento’s lack of effort and accountability, both of which were on display Tuesday.

“Overall poor effort, for the most part. (We) couldn’t defend at all,” Malone said. “I’m very disappointed in our effort, in our competitive spirit and our competitiveness…. My concern is that I think right now we have some guys that are feeling sorry for themselves. That’s pathetic. No one’s going to feel sorry for you. You’re a pro, do your job.”