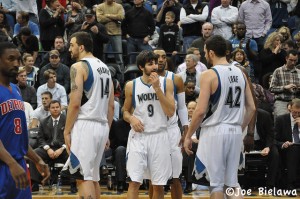 It’s extremely easy to focus on the season Kevin Love is having, particularly if you happen to play fantasy basketball. Based on basic statistics (points, rebounds, and assists), Love is one of basketball’s best. Accordingly, Love found himself in New Orleans over the weekend for the NBA All-Star Game, a deserving participant, scoring 13 points and hauling in nine rebounds as a starting forward for the Western Conference. Love is the easy basketball story in Minnesota this season, because talking about the team as a unit is often an exercise in frustration.

The Minnesota Timberwolves haven’t been to the playoffs in a decade and are still on the outside looking in. Timberwolves management has finally assembled a roster teeming with enough talent to at least look like a contender, some of the time. This only makes their more than occasional struggles more frustrating. Analysts agree that the talent is there, but the expected wins are not.

Their 105.5 points per game average is third best in the NBA, so scoring is seldom an issue. Interestingly enough, while the Timberwolves’ 101.8 opponents’ points per game average ranks just 21st in the league, their defensive rating (points allowed per 100 possessions) is ninth in the NBA. The raw numbers point to an expected winning percentage of 33-20 (ninth in the NBA), but their actual record is a pedestrian 25-28, good for 10th in the Western Conference.

The team dominated the Denver Nuggets on February 12 to close out the first half of the season, en route to a 27-point victory. Even with Pekovic (right ankle bursitis) and Martin (broken left thumb) out, this was exactly the type of game fans have come to expect of this team when it’s firing on all cylinders (even if they weren’t). Blowout wins have been fairly commonplace for the Timberwolves. Sadly there are too few of these games for the team or its fan base to get overly excited about a playoff appearance, much less a prolonged run.

The T-Wolves lost six of their last eight games, all without the services of Nikola Pekovic. The addition of Martin to the list of walking wounded certainly hasn’t helped. The team is especially inept when it comes to winning the close ones. The Timberwolves have won a single game decided by four points or less, a fact that reveals much about the true competitive character of this current iteration. Good teams win close games, and it’s really starting to look like this just isn’t a good team—a bad season not to be a good team, by the way.

Regardless of the internal struggles with wins and losses or closing out the competition, the Timberwolves face some stiff competition in a loaded Western Conference. The surprising Phoenix Suns (30-21) and the Golden State Warriors (31-22) appear to be dead set on making the playoffs themselves with the Memphis Grizzlies (29-23) also vying for a spot. Given the winning percentages of their immediate competition, the Timberwolves would likely have to finish the season on a 23-6 tear to even have a shot at making the playoffs. Given their ups and downs, that’s probably an unrealistic goal, particularly if the team can’t get everyone healthy at the same time.

The T-Wolves face some tough competition coming out of the break, starting with the Indiana Pacers. They follow that contest with a five-game road trip. For the record, the Timberwolves are only 10-17 away from Minnesota this year, a record that places them near the bottom of the Western Conference in road winning percentage.

Perhaps the long weekend will allow some of the Timberwolves M.A.S.H. unit to nurse their aches and pains back to full health. Even at 100 percent, the playoffs look like a pipe dream. Leapfrogging three teams in the standings is no easy task. It’s even harder when those teams are actually good at playing basketball. Could it happen? Sure, it could. However, the NBA is a fairly predictable league, at least in terms of winning and losing. Barring an unlikely confluence of circumstances, this team will continue to entertain while struggling to win basketball games. That’s the story we should expect in the season’s second half.