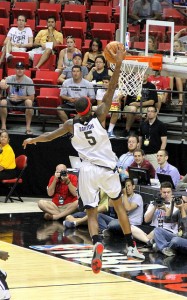 A broad smile lit up Will Barton’s face when he was asked what he thought about the fans chanting his name in Portland’s 124-80 rout of Brooklyn.

”I like to think I’m the people’s champ,” Barton joked after scoring had a season-high 20 points and grabbing a career-high 11 rebounds off the bench in an inspired victory for the short-handed Portland Trail Blazers.

Portland won its fourth straight game despite missing forward LaMarcus Aldridge. The team’s top scorer and rebounder has been out five straight games with a left groin sprain. Associated Press

Kevin Garnett on tonight’s loss: “It’s too late in the goddamn season to be playing like this.”

Deron Williams: “It was a bad game for us. They came out there and kicked our ass. … It’s a little embarrassing.”

The West, though, could kick their butts. RT @TimBontemps: Paul Pierce: “We could be playing the East All-Stars, we shouldn’t lose by 40.”

When was the last time Dwill and JJ had a good game on the same night? @brooklynsbeat @NetsDaily @TheBKGame @TimBontemps @GHrinyaNets

Is this the nadir of the Nets’ season? They were supposed to be legitimate contenders for the title and now they are losing to the Blazers by 44 without LaMarcus Aldridge. It’s mind blowing. Even the most pessimistic assessment of the Nets did not predict so much fail. – AL