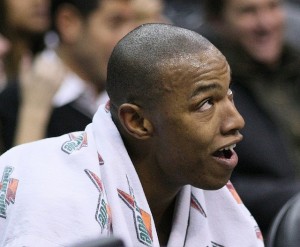 The Thunder announced Saturday the signing of Caron Butler, who was bought out by the Bucks earlier this week.

“We are pleased to welcome Caron Butler to the Thunder organization and to Oklahoma City,” Thunder GM Sam Presti said in a statement. “Caron represents what we look for in a Thunder player and will positively impact our team. His toughness, hard-nosed defense, resiliency and highly regarded professionalism will only enhance our depth and bring additional versatility to the roster.”

Yahoo Sports and The Oklahoman both reported Friday that the veteran small forward was headed to Oklahoma City once he clears waivers on Saturday. Miami also reportedly expressed interest. Sports Illustrated

Caron Butler is probably the best guy signed from waivers this season. It’s hard to gauge how much he has left in the tank since he was playing with the Milwaukee Bucks who have the worst record in the NBA. Barring injury, this signing should pay dividends for the Thunder in May and June. – AL