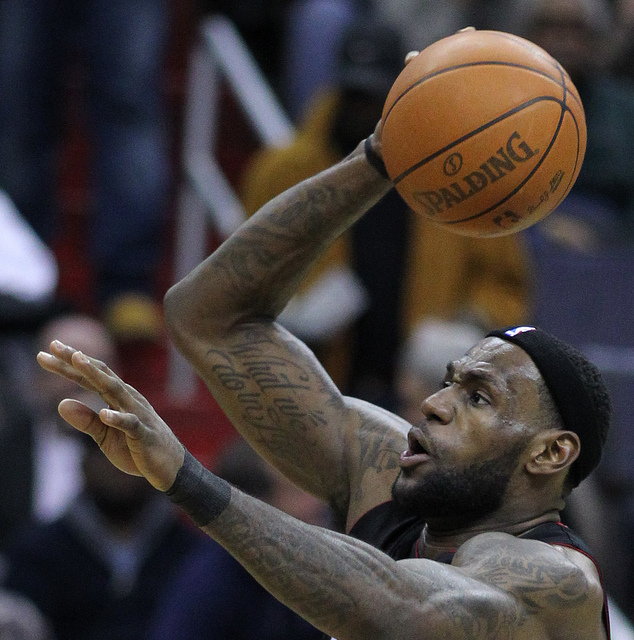 The Heat star had a February for the ages, becoming the first player since Shaquille O’Neal in 2003 to average 30 or more points and eight or more rebounds while shooting better than 57 percent from the field for an entire calendar month (a minimum of five games played). Toss in LeBron’s seven assists a game in February and only Wilt Chamberlain, in February of 1966 has had a wicked stretch of that sort.

That’s why LeBron going for a career-high 61 points in the Heat’s 124-107 home win over the Charlotte Bobcats on Monday ranks right up there among his greatest performances ever. He did it with a mask on, protecting his recently broken nose. He did it with Dwyane Wade resting in street clothes, as part of ongoing maintenance program. And he did it with work from all over the floor, including a career-high tying eight made 3-pointers.

He needed just 33 shots, 22 makes, to notch the 10th game of 50 or more points of his career and his first outing of 60 or more. He’s one of just five players to reach the 60-point plateau shooting better than 65 percent since the 1985-86 season — joining Carmelo Anthony from earlier this season, Shaq in 2000 and Tom Chambers and Karl Malone (both in 1990) as the only players to accomplish that feat. NBA

What I will remember from this performance is that I didn’t see it live. I actually considered turning it on, but opted to watch the Memphis Grizzlies versus the Washington Wizards which turned out to be a decent game. It occurred to me that watching LeBron James in his prime is a fleeting moment that should be appreciated, but I still didn’t turn the game on because I was too lazy to change the channel. Oh well. – AL