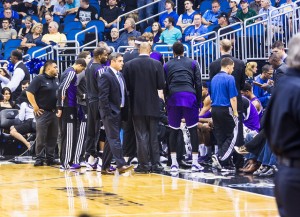 The NBA is a league in which one team and one organization can turn their playoff hopes into realities within a single, solitary month of stellar basketball. It’s a long road to the playoffs, in which every team is on level ground and the occasional Cinderella story lives on, whether it be from a one-seed or an eight-seed. But before all the glamour and hype that is the NBA playoffs, teams need to string together months of solid and consistent basketball.

That’s what the Brooklyn Nets have been doing in the first months of 2014.

Since January 1, the Nets are the league leaders in steals forced, and the team has a 20-9 record. On Sunday night, they hosted the Sacramento Kings to try to keep this insane momentum rolling and vouch for top-five playoff seeding.

The Sacramento Kings’ arrival in Brooklyn acted as a sort of reunion, a homecoming for Marcus Thornton and Reggie Evans to prove to their old teams that they won’t be defined by who they play for. However, even with Marcus Thornton’s team-high 27 points and Reggie Evans’ impressive nine boards on just 17 minutes of play, the storyline would once again be overshadowed by Brooklyn’s unforgiving and formidable defensive onslaught in the early going, which caused coach Malone’s team to force up absolutely abismal shots throughout the entire first half of the game.

Out of the 13 Brooklyn Nets players who saw some run tonight, 10 of them picked up at least one steal. Out of these 10, four players picked the Kings’ pockets at least two times, one of these Nets being Marcus Thornton, who had his best game by far in a Nets uniform.

Since Isaiah Thomas’ season started, he’s been among the best scorers in the Western Conference and one of the most effective pull-up shooters, knocking down his mid-range jumper with consistency in a fashion so few players are able to maintain. It’s a rare and remarkable thing to watch: Isaiah has perfected his craft and has been one of the Kings’ go-to options.

He always seems to be giving the Kings at least 15 points and five assists wether or not his game is on that night. Thomas always has the opportunities and ability to score the basketball. More often than not, he does so in an efficient manner, not putting up the wild shots so many NBA point guards are notorious for. He takes care of the basketball without allowing even the most hounding on-ball defenders to pick his pocket or get in the passing lane of a bullet to DeMarcus Cousins or Rudy Gay.

That’s why Isaiah’s seven turnovers were so detrimental.

The Kings need Isaiah to have the presence of mind and body to protect the basketball from opposing defenses, wether it be taking good shots or making good passes or even skipping out on a three-pointer once in a while when something better is lurking (he never does the last one). But, in any case, his premier ballhandling and protection capabilities were not on display tonight against one of the league’s best defenses, and it cost them seven offensive possessions.

Even in the third quarter when Sacramento cut the 14-point lead to zero it was clear the team was banking on Rudy Gay’s ferociously hot hand, isolating him on the right side and hoping his pull-up jumpers would fall. When the Kings came stumbling back, Rudy was ridiculously hot. He shot 50 percent on virtually all pull-up jumpers in the eye of Joe Johnson, something he’s been doing consistently since the move to Sacramento and something that hasn’t been seen since his time in Memphis. He made it look like the Barclay’s Center was nothing more than a neighborhood basketball court as he drained J after J before ultimately coming down awkwardly on his ankle and letting the Nets take over the game.

Not even DeMarcus’s incredible 28 points and 20 rebounds could stop this Nets team from completely dominating the fourth quarter. A little more production out of Isaiah and some smarter passing into the lanes, and this could have been a very different game against a very good Nets team. Now they’re headed to Michigan to take on the Detroit Pistons on Tuesday night.