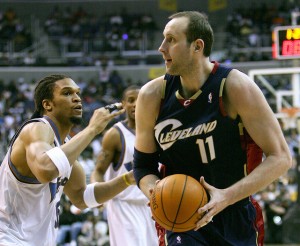 Before the speeches, before the spotlights, before the giant No. 11 rose through the smoke to the rafters of The Q on Saturday night, Zydrunas Ilgauskas had a few minutes to spend with the people who have meant the most to him.

His family, former coaches and teammates and the Cavaliers owners and executives — past and present — who brought them all together gathered in a room just off the court before the lavish halftime ceremony to retire his jersey.

“Danny Ferry came to me and said, ‘You know, you’re the only person that bring this group together in one room. Nobody else could,”’ Ilgauskas told reporters after the lavish production. “I felt like those people touched my life so much more than I have theirs. It was just special for them to take time out of their busy schedules and come to this occasion.”

That the group included LeBron James, in spite of the Miami Heat’s game at Chicago on Sunday, touched Ilgauskas deeply.

“For me, it was special,” Ilgauskas said. “There was some talk leading up to everything. The way I looked at it, if he wasn’t able to make it, that’s OK. I wanted to extend the invitation.

“But him being here is an added bonus for me because of what we’ve been through together. I consider him a dear friend, and we played so much, achieved so much, failed many times but also were successful a lot of times. For me, it would have been almost a detraction if he wasn’t here. Now that he was able to witness that made it so much more special.” The Plain Dealer

Big Z played 15 seasons in the NBA, 14 of which were as part of the Cavs. He was a solid player with career averages of 13.0 PPG and 7.3 RPG, but the additional perk of retiring Ilgaukas’ jersey was a chance to woo LeBron James, one of Big Z’s great friends, who attended the ceremony.

According to sources, the Cavaliers are planning to recruit LeBron James, LaMarcus Aldridge, and Kevin Love during two offseasons for now. Can someone let the front office know that leaks like this will likely piss off Kyrie Irving since it’s not possible to also keep him on the roster in this scenario? – AL