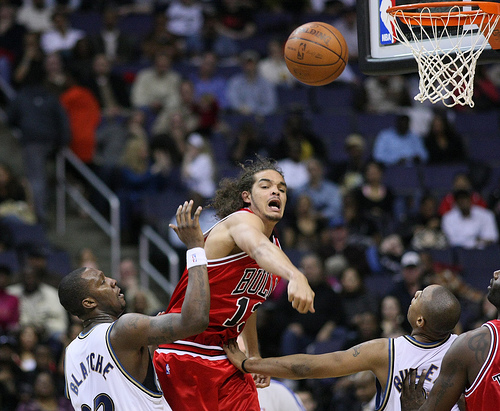 Rudy Gay inbounded the ball from the sideline to an off-balance Isaiah Thomas, who nearly turned it over by launching it up court in an effort to save the possession. The Sacramento Kings recovered, though, and converted to bring the game within one possession with 29.5 seconds left.

On the ensuing inbound play, despite only needing a defensive stop against a Chicago Bulls team that struggles to find offense, Thomas inexplicably committed an intentional foul, eliminating any chance the Kings had of winning a close game.

From there the contest devolved into a test of Chicago’s free-throw shooting, which it passed en route to a 94-87 win Saturday night.

The game’s climax played out much like the rest of it had for Sacramento: it kept the game close in spite of numerous mistakes, but those miscues prevented the Kings from stealing a rare victory away from home.

Per usual, the Bulls (37-29) hounded their opponents defensively and to great effect. Taking care of the basketball has been a problem for the Kings (23-43) over the last couple months and has been a fatally bad habit over the course of their recent road swing. Saturday was no different and Chicago’s active defense forced Sacramento to turn the ball over 18 times.

Due in no small part to their opponent’s relentless physicality on defense, the Kings rarely found comfort in the inhospitable confines of the United Center.

Early on they looked to get the Bulls off-kilter by pushing the pace, making a point of getting into transition. The strategy worked at times, keeping them in the game, but Sacramento was careless on the fastbreak in the first quarter. Errant passes erased good looks and accounted for five first-quarter turnovers.

The game gradually slowed to a crawl following the opening quarter, yet the Kings managed to keep their head above water in the Bulls’ preferred plodding tempo.

DeMarcus Cousins, who struggled in the game’s early goings, came out of halftime strong, aggressively looking for his own offense in the paint. He found it and finished with 25 points and 14 rebounds.

Once the Bulls started to key on Cousins, throwing double-teams at the Kings center, he involved his teammates. Thomas, in particular, benefitted from the extra attention Cousins garnered; he scored 18 of his 26 points in the second half, a few of which came off of kick-outs from a double-teamed Cousins.

But turnovers persisted, and offset any occasional offensive rhythm the Kings could muster.

So too, did Joakim Noah, who dominated on both ends of the floor throughout the game.

The Bulls needed scoring in the first half, and Noah gave it to them, tallying 15 first-half points. With Kirk Hinrich in foul trouble, they were in need of a facilitator; no problem, Noah fit the bill. In one sequence, he assisted Taj Gibson on a perfectly fundamental chest/outlet pass, which he followed up on the next possession with a textbook entry pass to Gibson for another assist.

And, as always, Noah was a dynamo on defense. He had five blocks in the paint and a few steals on the perimeter – one of which led to a coast-to-coast finish by Noah.

Despite losing, the game was hard-fought by the Kings and one that will likely have after effects tonight, when they take on the Minnesota Timberwolves to conclude a seven-game road trip.