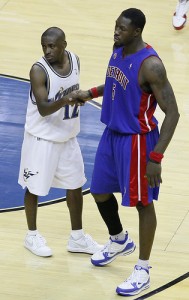 Former NBA and Virginia Union University basketball star Ben Wallace entered a plea of no contest after he was arrested Tuesday for leaving the scene of a February car crash.

The Henrico County judge suspended all but two days of the sentence. Wallace started serving his two day sentence Tuesday.

“It’s kind of light for a situation like that,” said Tim Olive who lives near the scene of where the crash happened.

CBS 6 Legal Expert, Todd Stone said it may sound like a light sentence, but Wallace’s punishment is not unreasonable.

“This looks like the type of situation you would see when a prosecutor could have difficulty proving a case, and they’re trying to work out some plea agreement that’s kind of right in the middle,” said Stone. CBS WTVR

Ben Wallace was an integral part of the 2004 Detroit Pistons championship squad. The four-time defensive player of the year played in the league as an undersized center for 16 seasons.  – AL